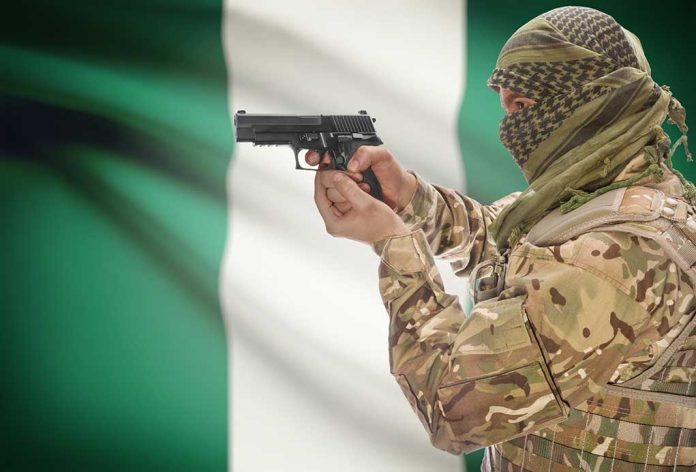 (UnitedVoice.com) – For 13 years, the Nigerian army has been fighting an Islamic insurgency known as the Boko Haram. Now, critics allege the Nigerian government has failed to stop the terror group’s sophisticated criminal networks from operating massive and profitable kidnapping operations. In recent months, armed gangs have terrorized northwestern Nigeria by kidnapping children and harassing security forces.

On Monday, March 28, Boko Haram terrorists and a notorious kidnapping gang allegedly worked together to attack a high-speed train, resulting in eight people dead and 168 missing. The kidnappers abducted dozens of individuals after the group destroyed the train track with guns and explosive devices. No one has taken responsibility for the attack. According to the BBC, the governor said an investigation and a rescue operation to retrieve the abducted were underway and ruled out paying any ransoms to recover the victims.

Over the past 24 months, armed terrorists and gangs killed hundreds of victims, and many fled from their homes for safety. It’s the second time terrorists have attacked the usually safe train system in six months. The Boko Haram overwhelmed and outgunned 18 armed law enforcement officials present on the train, leaving them helpless to stop the raid.

Some first-hand witnesses to the horrifying event told the BBC the attackers surrounded the train after it came to a stop and fired guns from several directions. One potential victim said he could hear the gunman entering other train cars and screaming at passengers. In several instances, there was gunfire. The hijackers ordered people off the train and into the bushes, where many disappeared.

The BBC said there were 362 passengers on board the train. That conflicts with the Nigerian Railway Corporation’s statement indicating 970 passengers were on the train. The company didn’t indicate if the 168 missing individuals were all customers or included train staff.

According to Reuters, abductors contacted some victims’ families to say they were holding their loved ones for ransom. The evening after the kidnappings, authorities said the kidnappers began calling families to inform them their family members were safe. In addition, they provided instructions on how to pay a ransom to free their loved ones.

As the tracks undergo repairs, the Nigerian government faces steep criticism. President Muhammadu Buhari’s opposition has encouraged him to resign. So far, Buhari is resisting the calls.

Government officials said military aircraft would fly above trains for protection in the future.

Will that be enough to protect travelers?