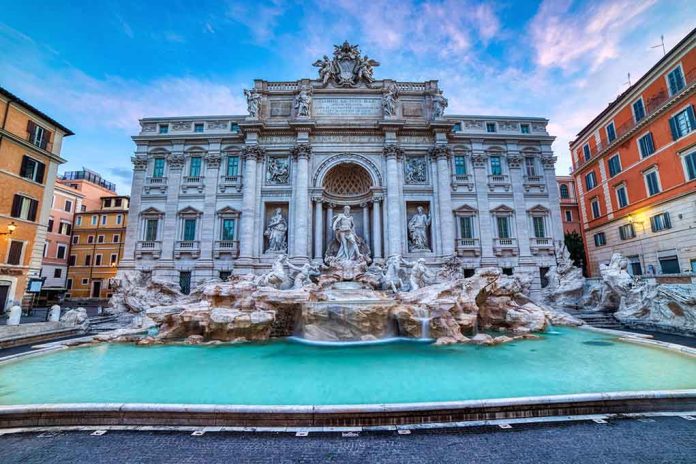 Finnegan and Gabriel testified neither Rega nor his partner identified themselves as police officers. Both young men said they assumed the officers were simple street thugs who intended on doing them harm.

Elder testified Rega began to strangle him after they began to quarrel. He allegedly pulled out a 7-inch survival knife and repeatedly stabbed Rega out of self-defense.

Natale-Hjorth claimed he was unaware of the stabbing, stating he ran back to their hotel after a short skirmish with Rega’s partner. He continues to deny having any part in the stabbing.

Rega had recently returned from his honeymoon before that fateful night. His homeland hailed him as a national hero.

Rega’s partner, Andrea Varriale, testified neither officer had a gun on them at the time of the murder. She also stated both officers showed Finnegan and Gabriel their police badges before the altercation began.

Both Finnegan, now 22, and Gabriel, now 20, were eventually charged and convicted of a long list of charges:

Italian authorities can charge individuals with murder just for being an accomplice. For this reason, Natale-Hjorth ended up facing the same fate as his friend despite leaving the scene.

The fact that Elder had a survival knife on him in the first place also raised questions for prosecutors and others following the case. It isn’t clear where the California native managed to get the weapon in the first place; most flights bar any device or tool larger than a nail clipper.

An appeal trial began for both men on Thursday at the Italian Capitol. Renato Borzone, one of Finnegan’s lawyers, claims they will do their best to seek justice. He feels the courts failed to examine all evidence during the trial.

Prosecutors, however, aren’t so ready to give up. They fought to preserve both life sentences at the first appeal trial on Thursday. While the courts minimized Gabriel’s sentence to just 24 years, the courts maintained Finnegan’s life sentence.

Borzone acknowledged the defense team would call no witnesses to testify in the next appeal. That means the final verdict could come as soon as March 18.

The families of both men continue to advocate for leniency in the matter. Elder’s mother told the Associated Press she trusts the Italian justice system to choose the right outcome. She firmly believes the original trial contained “inconsistencies.”