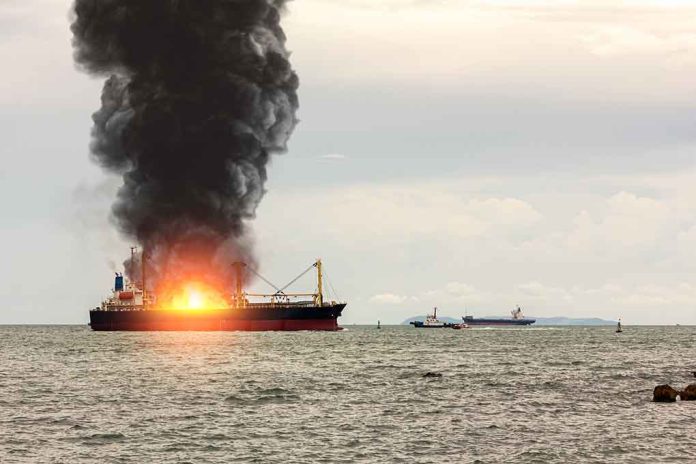 (UnitedVoice.com) – A cargo ship loaded with thousands of cars was on fire and adrift in the Atlantic Ocean last week, after the Portuguese Navy had to rescue the crew from the burning vessel.

On February 16, a fire broke out on the Felicity Ace, a 650-foot cargo ship capable of carrying over 4,000 cars. The ship was en route from Emden, Germany, to Davisville, Rhode Island, with a cargo of cars, mostly Volkswagens, Audis and Porsches, as well as some Lamborghini supercars. The fire began while the ship was about 100 miles west of the Portuguese-owned Azores. When the crew was unable to put the fire out, they were forced to abandon ship. All 22 men were later rescued by the Portuguese Navy.

The ship is now drifting, still on fire, and being followed by a Portuguese patrol ship and two firefighting tugs that are trying to cool down the exterior of the ship. Its owner, Snowscape Car Carriers, is trying to arrange a salvage tug to take the ship under tow; however, the Portuguese Navy says it’s unlikely to be towed to the Azores because it’s too big for the harbors there.

With 3,965 cars on board destined for the US market, the fire on Felicity Ace could mean serious delays for many buyers. Are you waiting for delivery of a European car? If so, check with your dealer to make sure your car isn’t adrift on an abandoned, burning ship.