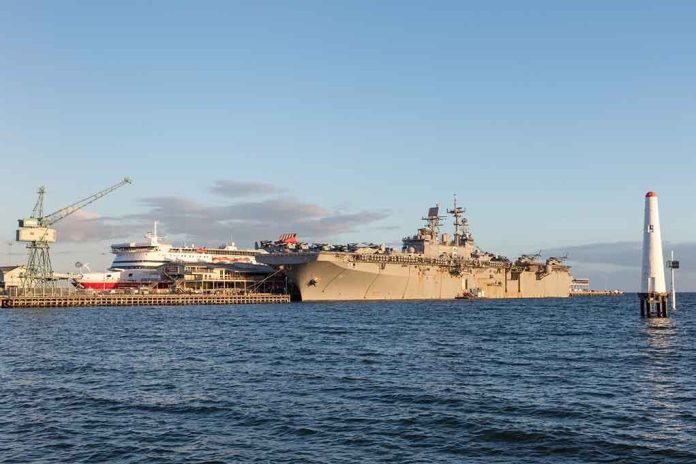 (UnitedVoice.com) – On July 12, 2020, a blaze started on the USS Bonhomme Richard, destroying it. Authorities later arrested Seaman Ryan Sawyer Mays and charged him with arson. However, a Naval court has now vindicated the sailor.

On Friday, September 30, a Navy judge found the 21-year-old sailor not guilty on all charges after a nine-day trial. Mays faced life in prison for willful hazarding of a vessel and aggravated arson. Navy prosecutors had claimed he was an angry sailor who’d wanted to become a Navy SEAL. He dropped out of the elite course, and the military reassigned him to the amphibious assault ship while it was undergoing renovations. Mays’ job was to scrape paint and mop. The prosecution claimed he became so angry he lit the ship on fire.

Mays’ defense team pointed out that there was no evidence he lit anything on fire. When the judge acquitted him, he reportedly wept.

VERDICT IN: NOT GUILTY

During a press conference after the verdict, Mays said he was happy the case was finally over after two years of uncertainty. He pointed out that he’d “lost time” with his friends and family throughout the ordeal, and his “entire Navy career was ruined.”

The young man simply said he’s eager to start his life over.