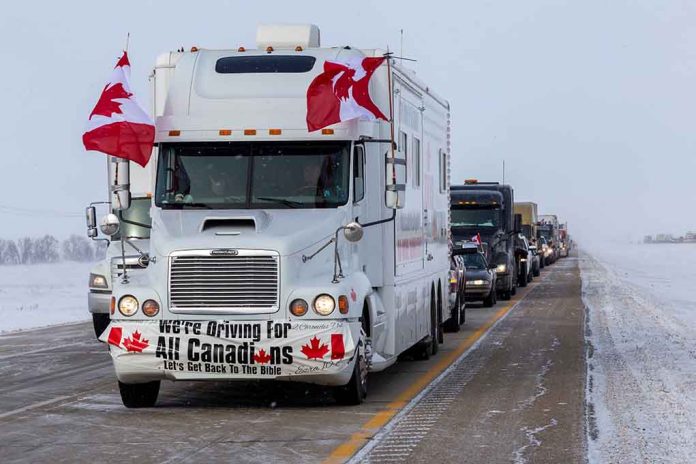 (UnitedVoice.com) – In late January, thousands of truck drivers descended on Parliament Hill in Ottawa, Canada, to protest draconian COVID-19 mandates. As the protest approaches two weeks, many of them remain in the country’s capital. The mayor of the city has now taken drastic steps to shut the angry citizens down.

On February 6, Mayor Jim Watson declared a state of emergency. In a statement to the press, he claimed people were going to suffer injuries or death because of the alleged “irresponsible behavior” of some of the protesters. He defended his decision during an interview with CTV, saying he had to issue the declaration in order to allow the city to access equipment faster during the protest. Hundreds of more police officers were being deployed to the area.

The city is also removing diesel from the area in order to make it more difficult for the protesters to power their vehicles.

-Ottawa police are now confiscating fuel from the Freedom Convoy.

-The city has imposed a “state of emergency”, citing fraudulent reports of violence.

-GoFundMe shut down the organizers fundraiser, citing a “violation of terms”.

All of this for a peaceful demonstration… pic.twitter.com/Z9R8JolLn2

The protests have largely been peaceful, leaving many wondering why the mayor and government are treating them so poorly. One protester who goes by “Eric” told the Washington Post, “What we are doing is within the law.” Kimberly Ball, another protester, told Agence France-Presse that she’s at the demonstrations because she has concerns about the vaccines and she’s seen people she knows lose their jobs over the mandates. She said it’s about their freedom.