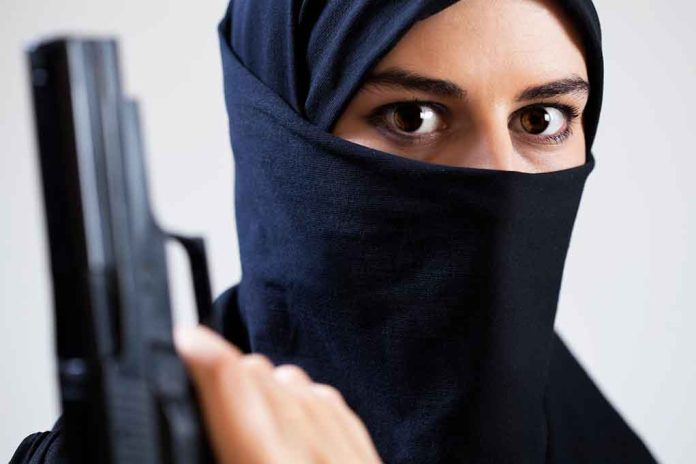 Terrorist Leader Finished – A Plea Has Been Reached

(UnitedVoice.com) – In 2008, Allison Fluke-Ekren left the United States and traveled to Egypt. The American citizen was with her husband, a member of the Ansar al-Sharia, an Islamic State group. More than a decade later, she’s back in the US and facing 20 years in prison.

On Tuesday, June 7, Fluke-Ekren went before a court in the Eastern District of Virginia. She pleaded guilty to leading and organizing an all-female ISIS battalion in Syria. According to a release by the Department of Justice, she moved to Benghazi, Libya, in 2011. Her terrorist husband allegedly participated in the attack on the US compound in the city on September 11, 2012, that claimed the lives of four Americans. That year, the couple and their five children traveled to Turkey and Syria.

Training to Over 100 Women and Young Girls in Syria on Behalf of ISIS and Numerous Other Terrorist Actshttps://t.co/ANYf8Uj0Rr

In 2014, Fluke-Ekren linked up with another female ISIS member who lived in a house adjoining hers for 18 days. During the visit, she reportedly discussed ideas to attack a midwestern US college with explosives. The following year she moved to Iraq and met ISIS officials who were in charge of a house that cared for widows of the organization. She eventually returned to Syria in 2016 and founded a home for women and girls as young as 10, teaching them how to fire guns and operate suicide belts. She began running an all-female battalion in 2017. Eventually, the US government arrested her and transferred her back to the US.

Fluke-Ekren pleaded guilty to providing material support to a foreign terrorist organization. A judge will sentence her after reviewing sentencing guidelines.