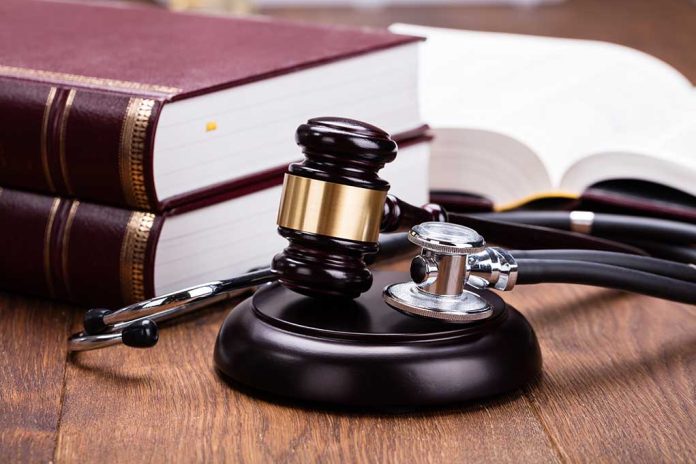 (UnitedVoice.com) – Things are beginning to come into legal focus regarding President Joe Biden’s vaccine mandates. If Biden had followed his initial inclinations, he wouldn’t have any Constitutional problems at all. In December 2020, the then-president-elect said he wouldn’t impose a federal mask or vaccination mandate. By summer, the president was scolding unvaccinated Americans, telling them his patience was wearing thin, and he was changing his mind.

On November 12, the 5th Circuit Court of Appeals ruled Biden’s workplace vaccination mandate for companies over 100 employees violated the separation of powers between the federal government and the states in what’s known as the Nondelegation Doctrine. On November 23, the 6th Circuit refused to overturn the stay of the employer vaccine mandate. Now, Biden’s in deep water over a vaccine mandate involving healthcare workers.

On November 4, the Department of Health and Human Services (HHS) through the Centers for Medicare and Medicaid Services (CMS) issued an emergency COVID-19 vaccination mandate for staff at healthcare facilities participating in Medicare and Medicaid programs. In a memo issued by CMS, the agency suggested unvaccinated healthcare workers posed a severe strain on the healthcare system and limited patient access to safe and essential care.

US District Judge Matthew Schelp didn’t see it that way in a 34-page ruling, and neither did ten states that sued over the CMS mandate. The states argued the federal government infringed upon states’ rights as determined by the 10th Amendment, the agency exceeded its authority, and the edict didn’t follow the proper procedures.

In his ruling Judge Schelp temporarily halted the vaccine mandate on healthcare workers in 10 states, the judge said the federal government forced medical facilities to choose between two undesirable choices. They could either provide substandard care or no healthcare at all. Shelp added the executive branch cannot extend its powers beyond what Congress authorizes.

When the framers wrote and ratified the US Constitution in 1787, they were deeply concerned about one person or group assuming the power to enact and enforce laws. The President does not have the authority in the Constitution to write law through regulations. Yet, that’s what Biden did in this case via the OSHA workplace vaccination mandate. Biden attempted in both the CMS and OSHA vaccination mandates to use a Constitutional workaround using the Emergency Temporary Standard (TMS).

The Nondelegation Doctrine derives from the 10th Amendment. It states that Congress and the president must adhere to the separation of powers between the two branches to prevent the president from becoming all-powerful. It prevents the executive branch from unilaterally creating laws and then enforcing them.

It’s becoming more apparent the federal courts will do their jobs and enforce the US Constitution. That’s problematic for Biden. He needs the power to enforce his political will. Unfortunately for him, the Constitution only grants limited powers to the federal government. In these cases, the courts are making it abundantly clear the administration cannot force businesses or individuals to choose between their freedoms and livelihoods.

These cases are likely to make it to the US Supreme Court. It could be a tough road for federal lawyers. The lower courts appear to be following Supreme Court precedent regarding the Nondelegation Doctrine and the 10th Amendment.

Stay tuned for more to come.