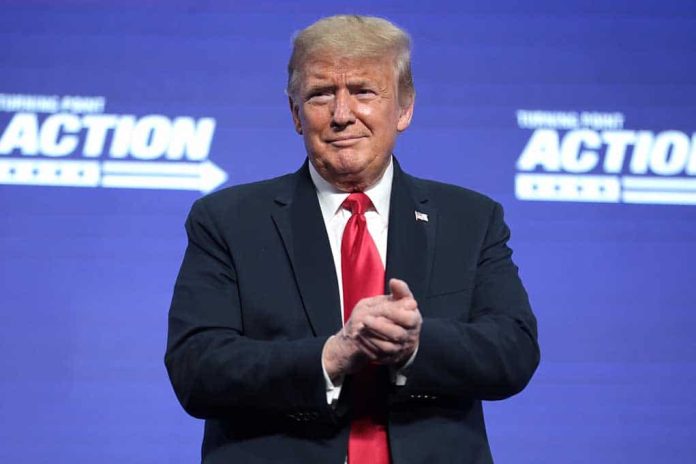 (UnitedVoice.com) – Since Joe Biden’s inauguration on January 20, America has experienced one crisis after another. The response from the administration has been to either double down, retreat from previous positions, or mock Americans. On Wednesday, October 20, a New York Post editorial said it perfectly. The Democrats do not respect the American people.

As the problems continue to mount for Democrats heading into the 2022 midterm elections, the door may be opening for former President Donald Trump’s re-election chances if he chooses to run in 2024. A new poll suggests Biden and Trump are tied in a potential rematch of the 2020 contest. A closer look at the poll internals shows a different story. Trump may have a growing advantage.

The litany of contradictions and insults to the American people is growing. For example, since January 20, Biden has done the following:

The list goes on, but you get the point. Repeatedly, White House Press Secretary Jen Psaki quipped or laughed at reporter’s questions regarding serious matters. She said illegal immigrant late-night flights were “earlier than you might think.” She said it’s a real tragedy when someone purchases something and can’t get it when people need or want it. She routinely diminishes real-world struggles because, for her, there are no real struggles except dealing with journalists asking questions over the failed administration’s responses to self-inflicted crisis after crisis.

Americans care about a lot of things. They care that their rising wages are worth less with the fast-paced rise in gasoline and grocery prices. People want to buy Christmas items for their loved ones and friends. They want to work without being forced to decide between personal choices of conscience and threats of losing a job.

It doesn’t seem so.

Trump Fortunes on the Rise

While Democrats insult voters and wonder who those crazy deplorables are who won’t vote for them, the GOP is poised to take back the House and Senate in 2022. Looking ahead, things could get interesting if Donald Trump runs for the White House in 2024. Biden’s approval ratings continue to collapse, and trust for the president erodes among Republicans and independents.

According to a Grinnell College National Poll released on Wednesday, October 20, Trump and Biden are tied if the election was today. The poll says 40% of likely voters would pick Biden and 40% would pick Trump, and 14% said they would vote for someone else.

Here’s where things get interesting. In polls since August, Biden’s been bleeding support from independents. This poll shows a continuing trend as 45% of independents said they would cast a ballot for Trump today over 28% for Biden. Elections are won on two factors:

Independents decide elections regardless of what the base of a candidate does. So, if the independent trend continues, and Biden and Trump choose to run in 2024, the odds are with the former president over the current one.

Three years is a long time away, and a lot is bound to change between now and then. Polls are only a snapshot in time. Yet, trends can bake in over a long period of time. Sustainability is the key for Trump. Will Biden continue to help him?