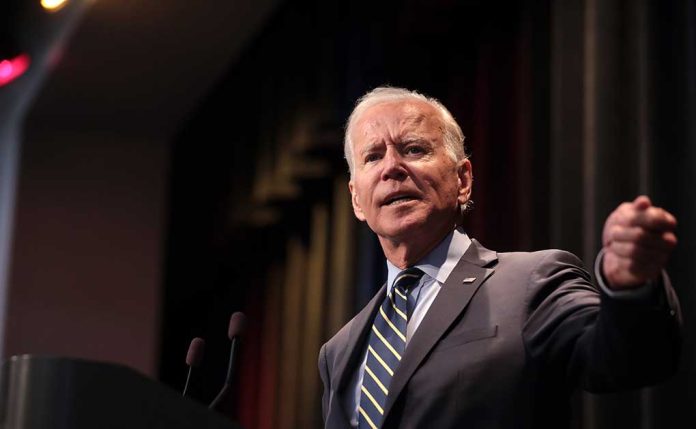 (UnitedVoice.com) – It is hard to remember a time when a president had so many issues go against him in federal court. On immigration, eviction moratoriums, and more, President Biden continues to exert power the Constitution doesn’t give him. That’s not stopping Biden from implementing policies to achieve his political objectives before the court’s rule he’s behaving inappropriately, to say the least.

On Tuesday, November 23, Biden’s Department of Justice (DOJ) filed an emergency appeal with the 6th Circuit Court of Appeals. Federal attorneys asked the court to reinstate the workplace vaccination requirement by the Occupational Safety and Health Administration (OSHA). Several weeks ago, the 5th Circuit Court ruled the vaccination mandate was flawed and was likely a violation of the US Constitution.

A close look at the language used is important. By citing “grave” and deadly, the government is trying to justify OSHA’s “Emergency Temporary Standard” (ETS). In essence, an ETS allows the government to bypass hearings, studies, and other protections before issuing a regulation. OSHA must determine that workers are in “grave danger.”

Recently, the Biden administration asked the courts to combine all of the lawsuits into one case. The conservative-leaning 6th Circuit drew the straw. The DOJ tried arguing that the 5th Circuit Court’s stay was meritless and that the OSHA did not exceed the government’s authority under the Commerce Clause of the US Constitution.

Why the Court Likely Won’t Agree

While the court is sympathetic to those who may suffer from COVID-19, the law is still the law, and the Constitution doesn’t go away during a pandemic. George Washington University Constitutional Law Professor Jonathan Turley says Biden used OSHA as a workaround to the Constitution.

Turley argues that an ETS protects workers from exposure to harmful or dangerous toxins and hazards. He said the ETS was not created for “convenience so a president can impose a mandate indirectly that he cannot impose directly.” The professor added the administration didn’t design the vaccine mandate to make the workplace safer. Its purpose is to make society at large safer. That’s a significant problem for OSHA’s directive.

There’s no way to know where many people contract COVID-19, and they aren’t dying in businesses. Turley says the courts will likely demand OSHA explain the “grave danger” standard.

Regardless of what the 6th Circuit decides, the case is likely to end up at the US Supreme Court, which has the final say in all legal matters.