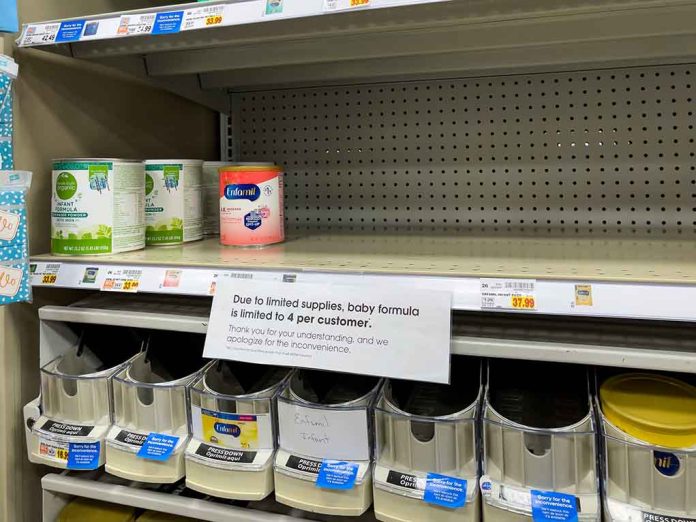 (UnitedVoice.com) – The nationwide baby formula shortage has left parents stressed out. Some have even reported traveling hundreds of miles to find specialty brands for their infants with specific dietary needs. After weeks of watching families struggle, President Joe Biden finally took action.

On May 18, Biden invoked the Defense Production Act to speed up infant formula production. He also authorized import flights from overseas to help restock American shelves. The supply shortage began after Abbott Industries shut down its Michigan formula factory amid safety concerns in February. The factory was the largest producer of infant formula in the US.

A military plane carrying 39 tons of baby formula landed in Indianapolis on Sunday, May 22. Secretary of Agriculture Tom Vilsack confirmed the flight was the first of many promised by the Biden administration when it launched Operation Fly Formula.

I’m in Indianapolis, where the first shipment of formula brought to the United States under Operation Fly Formula arrived this morning. This shipment of formula serves a critical medical purpose and will help infants with specific dietary needs requiring specialized formula. pic.twitter.com/BIrTfSo0X5

The formula flown into the US over the weekend was produced at a plant that the FDA approved. The administration expects more shipments, including one with 1.5 million 8-ounce bottles of hypoallergenic formula produced by Nestlé Health Science and Gerber.

The shuttered plant in Michigan is also expected to begin producing formula again, but it likely won’t hit shelves for several weeks. Abbott Industries has agreed to hire outside experts to help the factory comply with safety regulations. The FDA will supervise the process.

Have you or someone you know had difficulty finding baby formula?