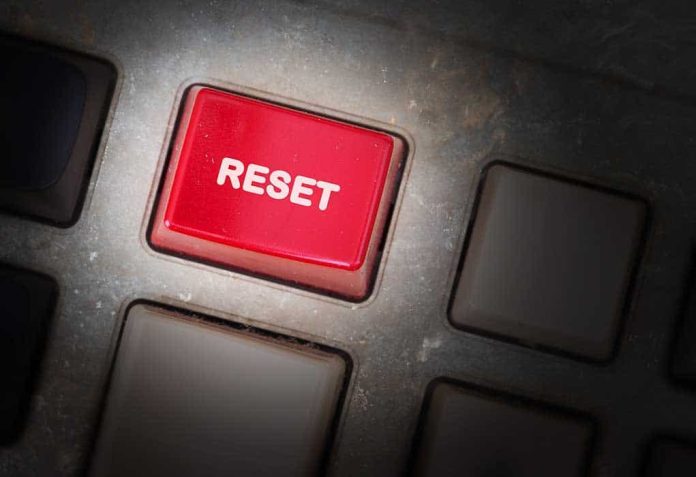 (UnitedVoice.com) – Many Americans know there is something intuitively wrong in this country. While the politicians, media, and voters focus on important issues such as the economy, inflation, and the outrageous proposal to expand government into a semi-Socialist state, something far more sinister is occurring behind the scenes. While we are all focused on the political system, President Joe Biden is laying the foundation for an economic system that won’t require Congress and would once and for all fundamentally transform America.

In 2020, Biden repeatedly claimed he was a Centrist who defeated the Socialist. The president pulled a fast one on many voters. After taking office in January, the commander in chief said he intended to become the next FDR, meaning he planned to re-imagine America’s economic system. There’s never been a question that Biden is a globalist, but he’s taking it to a new extreme. He’s maneuvering America to embrace “The Great Reset” proposed by the World Economic Forum, and the consequences couldn’t be more significant.

What Is “The Great Reset?”

In 2020, the World Economic Forum suggested it was time to “reimagine capitalism.” The United Nations, International Monetary Fund, and numerous multinational corporations and banks support the economic system. The Great Reset aims to transform the economy from shareholder capitalism to stakeholder capitalism.

In shareholder capitalism, investors put money into businesses through stocks, and companies use that money to acquire new capital to increase business output that focuses on profits, which makes businesses and society strong. In stakeholder capitalism, companies serve stakeholders’ interests, including employees, suppliers, customers, local communities, and, yes, the government. In this system, companies have one purpose, and that’s to create value. It’s not to maximize profits.

There are numerous components to The Great Reset. One main way to expand the government’s size, influence and control is through programs like Joe Biden’s Build Back Better plan. The second is for governments to require companies to adopt environmental, social, and governance (ESG) standards that consider climate and racial issues as a metric. Third and finally, politicians coerce businesses and other institutions to adopt ESG principles by printing massive amounts of cash.

How Is Biden Transforming America’s Economy?

Make no mistake, the Democratic Party is in on the gig. All one needs to do is look at the contentious massive social and climate reconciliation proposal in Congress. Second, many leaders of corporations are far-Left executives who support Democrats and this agenda. In those two cases, Biden has little personal control. In the other part, he has all the power.

In late 2020, Biden’s special presidential envoy for climate, John Kerry, acknowledged he and Biden supported The Great Reset. Kerry even promised it would “happen with greater speed and with greater intensity than a lot of people might imagine.” The greatest way to achieve the goal was through Biden’s political appointments to regulatory roles in his administration. That’s why he’s trying to force through several controversial figures who make clear they don’t consider the US Constitution a part of their decision-making.

Saule Omarova was nominated to head the Office of the Comptroller of the Currency (OCC), which regulates banks and federal savings associations. Omarova advocates bypassing Congress and putting the entire federal budget and spending under the unelected, unaccountable Federal Reserve. That would be a violation of Article I, Section 8, Clause 1 of the US Constitution that states, “The Congress shall have Power To lay and collect Taxes, Duties, Imposts and Excises, to pay the Debts and provide for the common Defence and general Welfare of the United States.” It’s also a violation of the Nondelegation Doctrine laid out in the Constitution.

If the Senate were to confirm Omarova, and it looks unlikely, she would be in a prime position to push or mandate ESG standards on businesses as a condition of receiving access to financial services.

Gensler is Biden’s choice to oversee the Securities and Exchange Commission (SEC). He may be the most important figure in speeding up The Great Reset. He is a strong proponent of ESG scores. As head of the SEC, Gensler could direct the powerful agency to develop mandatory ESG disclosure rules for publicly traded companies.

In September, the Senate confirmed Rohit Chopra to oversee the Consumer Financial Protection Bureau (CFPB). Chopra has a long history of regulatory activism and is the perfect person to push left-wing causes. She argues a false narrative that credit scores are rife with racially discriminatory policies justifying extreme changes to the US financial industry. Biden’s plan to reduce racial disparities mandates an inclusive credit scoring system and creates a public credit reporting agency. Guess who would oversee it?

Biden is laying the foundation to transform America’s financial system. By the end of his first term, it’s entirely possible the damage may already be in place. The only way to reverse it may be to elect a Republican president and Congress who are willing to eradicate the regulatory bodies infected with ESG frameworks and activists.

Elections have consequences. America is about to learn that lesson the hard way.