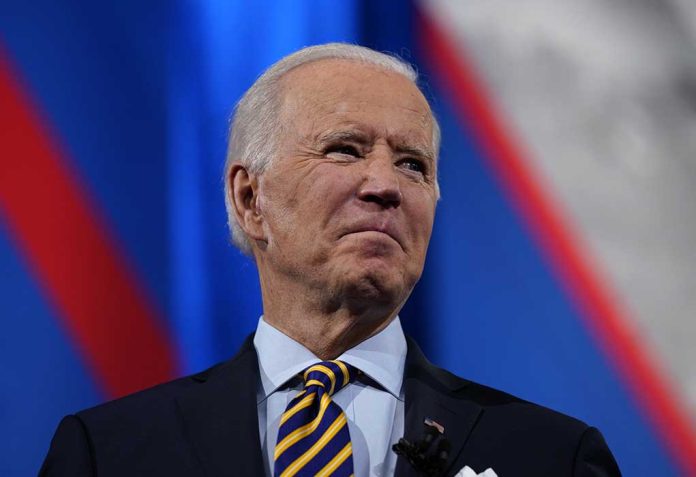 (UnitedVoice.com) – Denial is a feast prepared for victors. Political campaign strategists regularly evaluate a candidate’s personal strengths and weaknesses and those of their opponents. When the list of liabilities for your side is longer than the opposition’s, the candidate is in serious trouble. On Tuesday evening, December 14, one had to wonder if those around President Joe Biden are giving him accurate information about the state of his presidency or if he’s in complete denial. It’s likely the latter.

The president and Vice President Kamala Harris attended the annual DNC holiday party. First off, you know it’s a Progressive haven when they can’t even call it a Christmas Party, but let’s not devolve from the main point. Biden is living in fairytale land. Speaking before donors, the angry but energetic president declared Republicans better watch out because, pal, the Democrats are going to win.

What intel are they basing their opinion on to suggest that will happen?

The Blinders Are on Thick

If Biden is honest with himself, this is one of the worst starts to a presidency in a long time. The worst part is the errors are self-inflicted. Biden ran as a Moderate, but that guy isn’t anywhere to be found. Let’s look at a few examples of the record Biden failed to mention on Tuesday evening:

While Biden tries to tell the world America is back, the world may not be so sure. He stabbed France in the back over a submarine deal with Australia, didn’t communicate with allies during the Afghan withdrawal, Iran is on a path to nuclearization and China and Russia are conspiring to make things difficult for the US and her allies.

Despite the massive record of failure, this administration genuinely believes it did good things.

What can Biden point to that’s positive? He didn’t change the rhetoric or lower the tone as he promised he would. The president certainly didn’t unite the country. It’s questionable if he even tried. Biden did manage to pass a massive partisan COVID-19 relief plan that wreaked havoc on the economy. He also got a bipartisan infrastructure deal passed into law, but that’s it — and even that has debatable left-wing woke language in it.

On Tuesday evening, Biden essentially told donors they’ll win if they make the case to voters. So, his answer is to distort reality to make it fit a narrative, and hopefully, no one catches on. It’ll work on Democrats, but it won’t work on independent voters who already experience reality daily — and they don’t like it. No amount of making the case changes the situation when the president and Democrats double down on failed policies.

His Enablers Pile On the Bandwagon

Polls show Congressional Democrats are in deep trouble. An ABC News/Washington Post poll showed Republicans leading by a 10-point margin among registered voters when asked who they would lean toward in the midterm elections. An early December CNBC poll showed similar sentiments. Biden’s approval rating is at 42.9% in the RealClearPolitics average of polls. That’s abysmal for a first-year, first-term president. Making matters worse, the pollsters are still oversampling Democrats, so it could be an even worse situation for the president.

Yet, it’s Republicans who need to watch out if you listen to Biden and the “bankrupt America” Democrats. Vice President Harris said the Democrats are fighting for Americans. If this is how they fight, you can count out many independents Democrats need to win elections. As it is, non-affiliated voters are abandoning the Democrats in droves, according to the polls.

House Speaker Nancy Pelosi (D-CA) even dropped by the holiday party to praise Biden for his leadership. Well, that cements Biden’s legacy, doesn’t it?

Here’s the reality. If Democrats want to fool their donors into throwing good money away, that’s okay. That just means there’s less of it in 2024 to go towards a Biden re-election campaign or another candidate who will struggle to explain to America why they are good for the country.

Let Biden live in his fairytale land. It will be his political downfall. Let’s just hope the country isn’t right behind him.