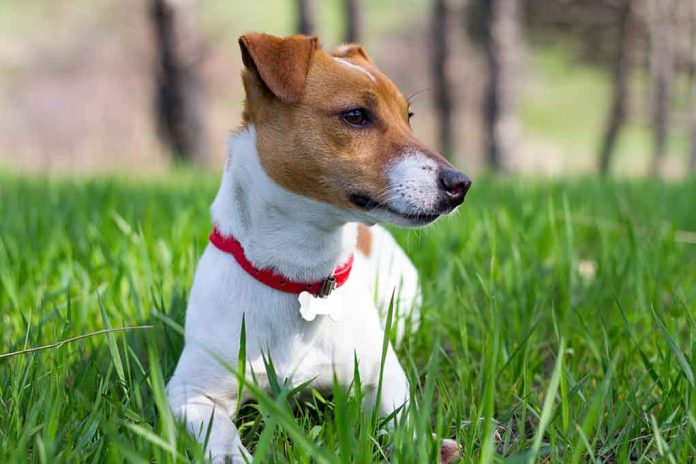 (UnitedVoice.com) – For centuries, man’s best friend has provided innumerable benefits to society. Many worked as farm dogs to assist in controlling or protecting livestock. Others served as police dogs or aided the blind or disabled. Trainers even prepare some dogs to support military veterans who have PTSD.

Since the American Civil War, dogs have served alongside military personnel. Today, they are a significant part of the US military. The military trains them for various purposes, including tracking, explosive detection, search and rescue, patrol, and even engaging enemy targets on the battlefield. There is a long line of military dogs who became heroes worldwide. Now, a new canine hero is emerging in Ukraine, and he’s saving lives through his important work.

In recent weeks, Russia pulled out of northern Ukraine to re-deploy to eastern Ukraine, and the military left behind dangerous explosive devices. That’s where Patron, a two-year-old Jack Russell Terrier, enters the story. In the northern Ukrainian city of Chernihiv, this mighty little hard-working dog diligently searches every day for explosive devices. According to the Ukrainian First Deputy of Foreign Affairs Emine Dzheppar, Patron has discovered almost 90 explosive devices since the beginning of the war in late February.

Patron has also inspired people during a time of despair.

Ukraine’s Center for Strategic Communications regularly shares Patron’s work on social media. It posts pictures and videos of the Jack Russell Terrier in protective vests as he works to protect the public on any given day by sniffing for explosives in fields. Sometimes, he even pauses to take pictures on armored vehicles, posing with rescue personnel or hanging with the crowd.

The Ukrainian agency has also used Patron to encourage Ukrainians. It hasn’t gone unnoticed. The hard-working dog has built up quite a following on social media, and the government says he may be the subject of a major motion picture one day.

Dogs Have a Rich History

Dogs have served alongside the military to pass along essential communications or assisted in helping locate land mines, unexploded bombs, and improvised explosive devices. Their unique noses work wonders in saving lives.

So, who are some of the hero dogs who served in the military?

The American Kennel Club cites a few four-legged heroes. Chip was a German Shepherd/Alaskan Husky/Collie mix that a family donated to the US military during World War II. He saved many lives and earned a Purple Heart and Silver Star. During the Vietnam War, a German Shepherd named Nemo became a hero after saving the life of his handler during an attack on Tan Son Nhut Air Base.

In 2018, Cairo, a Belgian Malinois, was a member of Seal Team Six that took out terrorist Osama Bin Laden. He was a special forces canine trained in bomb-sniffing and parachuting.

Your family dog has all the potential of these heroes. Their sense of smell, curiosity, and trainability make them man’s best friends at home and during a war. While Patron works on the front lines of Ukraine, he won’t be the last to serve his country and fellow man.

Dogs are indeed a unique and special species.