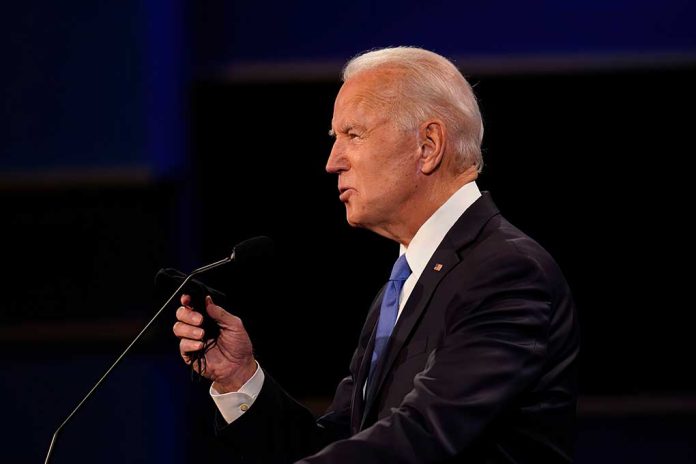 (UnitedVoice.com) – For four years, Democrats harassed President Donald Trump in an attempt to convince Americans that he was a big, bad, orange man who voters needed to kick out of office. Of course, they tried to do that twice on their own and failed. Whether fatigued voters cast ballots for Biden or alleged Democratic shenanigans prevailed in the 2020 election, Democrats got their wish, but it appears to have come with a price.

Under Biden’s leadership, the far-left hijacked the Democratic Party. While Biden continually claims he’s a Moderate, that’s not how the president has governed. As a result of the fast-paced pivot leftward, Democrats alienated Independents and Centrists in their party and face a shellacking in November. Biden knows Democrats need a course correction. The question is, can he reset America as long as Democrats are in turmoil and unable to push radical legislation through Congress?

Biden May Try to Reset the Left’s Agenda

On March 1, Joe Biden will give his first State of the Union speech to Congress and the American people. Biden’s likely to paint a positive, albeit misleading, story about the state of the country. The president will tout the millions of jobs he supposedly created, despite the economy roaring back after 20 million were unemployed in 2020 due to the pandemic shutdowns.

Most importantly, he may try to revive some or all of his socialist Build Back Better plan that Moderate Sen. Joe Manchin (D-WV) killed. Biden has nothing to show at this point for his presidency, except crippling inflation, a failed military withdrawal from Afghanistan, high violent crime rates, out-of-control illegal immigration, a potential war in Europe, and a deeply divided country owing to his racial agenda and equity rhetoric.

Oh, let’s not lose sight of his court-overturned overreach to mandate COVID vaccines on everyone, and Americans are fed up with the constant barrage of mask mandates as the CDC stubbornly sticks to outdated guidelines that even Democratic governors are bailing on.

Democrats Are Their Own Worst Enemies to the Benefit of Conservatives

While Americans express a lack of trust in government under Biden, inflation is eating away at people’s livelihoods, and Critical Race Theory divides Americans over its influence in classrooms. In one of America’s most far-left cities, San Francisco, over 70% of voters kicked out three woke school board members for going too far left while ignoring kids’ academic needs that would make them productive members of society one day. More and more, people are anxious and evaluating what’s important to them in their lives.

In the meantime, tone-deaf Democrats continue to step all over themselves as they fight about things that don’t matter to America. The Squad still demands communities defund the police despite how toxic the narrative is to the party. In the meantime, Democrats continue to try to sell the message that things are getting better, contrary to too many constituents’ experiences that say different.

While Democrats fight against one another, their extreme rhetoric, proposals, and spending are catching up to them. The more liberal one is, the greater the odds of a Republican winning in a more moderate congressional district, county seat, school board, or city council. This much is evident. As long as voters show up to the polls to cast a ballot this fall, Conservatives should have a strong showing.

As Biden tries to reset the Left’s agenda, it can only serve to help Conservatives make the case for why he’s a failed lame-duck president, and Conservatives are the ones with the policies to make America prosperous and free again.