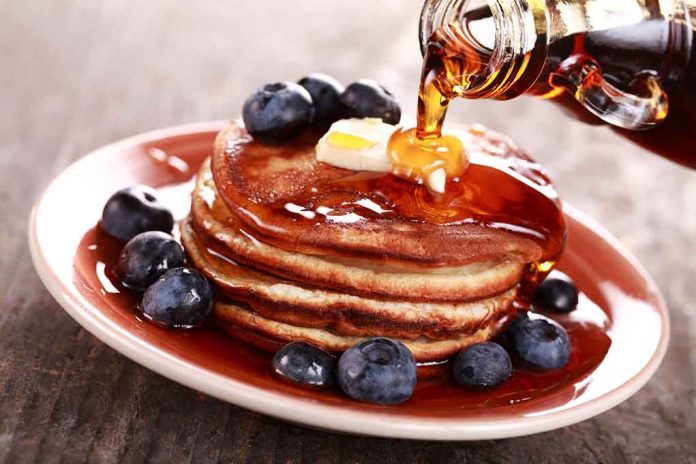 (UnitedVoice.com) – In America, President Joe Biden tapped the strategic oil reserve to reduce the price of gas. Meanwhile, in Canada, they are dealing with a shortage of their own and had a similar solution in mind.

In November, the Quebec Maple Syrup Producers announced they’re tapping into their strategic syrup reserve. The group released roughly 50 million pounds of its reserve, half of the country’s total stockpile.

Someone, somewhere, waited their whole life to give the order to "unlock the strategic maple syrup reserves!" and this week, they got their wish. https://t.co/g6E8wuQXMs

There are a few reasons for the decision. One of them is related to supply and demand, just like gas prices. There’s a 21% increase in demand for the sugary goodness. It should come as no surprise that the biggest importer of Canada’s liquid gold is the United States. While demand has increased, another issue may be responsible for a decline in supply.

Maple syrup comes from the sap of maple trees. As the climate has gotten warmer in the North, it’s become harder for the trees to produce the sap needed to make the sweet treat. A 2018 study published in the journal of Ecology found that between 1994 and 2013, the change in climate stunted the growth of maples.

University of Michigan Ecology Professor Inés Ibáñez reported that as the Earth changes, the bigger maple trees will still exist but “won’t be growing as much and the little saplings won’t survive.” So when the older trees die, there won’t be anything to replace them with.

That’s a terrifying prospect for those of us who love a nip of syrup with our weekend waffles.