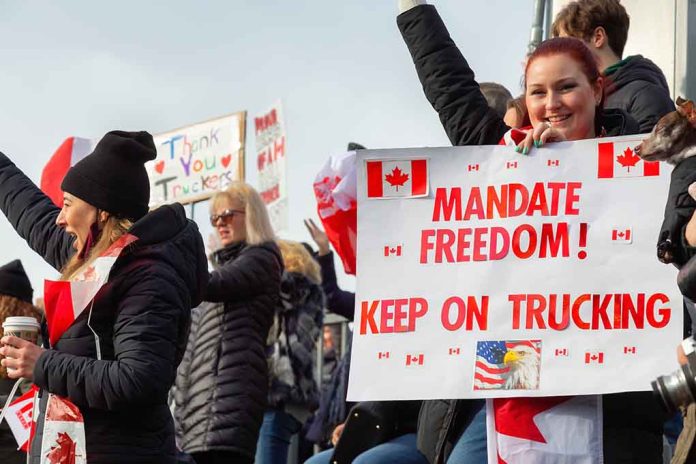 (UnitedVoice.com) – On February 14, Canadian Prime Minister Justin Trudeau took an unprecedented step to silence the Freedom Convoy. For the first time in Canada’s history, the PM invoked the Emergencies Act giving the federal government an incredible amount of power.

By invoking the Emergencies Act, Trudeau was essentially saying the trucker protest is a threat to the country’s national security. Once he declared a public emergency, the order went into immediate effect for 30 days. The order gives financial institutions the power to temporarily freeze funds for both people and corporations if they believe the money is being used to fund illegal activity. Trucking companies with trucks being used in the blockades can also have their accounts frozen and insurance suspended.

Trudeau’s government can jail protesters, impose fines, and use the military to force them off of the streets.

1. Trudeau has no legal justification for invoking the Emergencies Act.

It has never been invoked before — not even on 9/11, or the 2014 terrorist attack on Parliament.

Trudeau called the truckers "terrorists" but everyone can see that's a lie.

Deputy Prime Minister Chrystia Freeland issued a threat after Trudeau made the declaration, “Consider yourselves warned. Send your rigs home.” Despite the threats and warnings from the feds, the truckers have remained in Ottawa. They have made it clear they don’t plan to let the government off of the hook.

The Emergencies Act will expire after 30 days unless the Parliament steps in and extends it. They’re reportedly going to take up the motion soon.