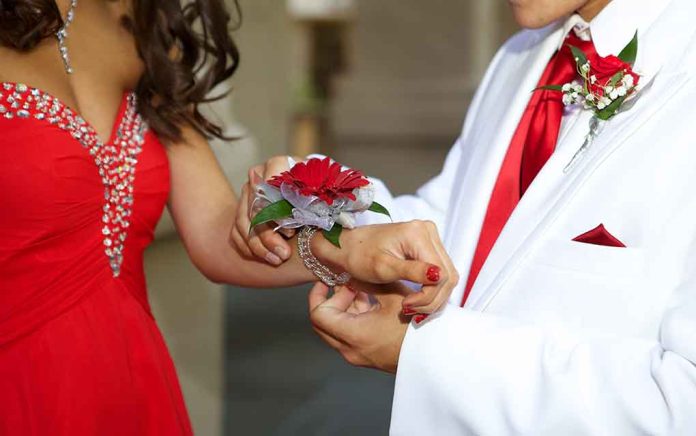 (UnitedVoice.com) – Overzealous Californians have found a new way to coerce people into accepting the COVID-19 vaccine – threaten to shut high school students out of their prom unless they get vaccinated.

On January 21, Monte Vista High School in Danville, California, sent families an email to let them know that tickets for the school’s junior prom would be going on sale the next day. That’s perfectly normal. However, this year’s email had one significant difference. It informed parents that students “must be vaccinated to buy a ticket.”

The prom took place on Friday, February 12, at the Oakland Scottish Rite Center, and access was strictly regulated. To be eligible, students needed to have had two shots of the vaccine, although boosters weren’t required. Those with recognized medical exemptions could get in if they showed a recent negative COVID test. But, if a student had chosen not to be vaccinated, they were denied a ticket.

Monte Vista principal Dr. Kevin Ahern told parents that, when he booked the prom venue, he believed the Scottish Rite Center would be covered by Alameda County’s COVID regulations, which require proof of vaccination OR a negative test. What he didn’t know was that the City of Oakland brought in its own, tougher, rules in December – and the city insists on vaccination only. Ahern says that, when he found out about the city’s rules and realized around 20 students would be affected, he tried to get an exemption for the event; city officials refused.

“We’re talking about minors,” Ahern says. “They don’t have full control over choices.” Unfortunately, if parents don’t make a choice officials approve of, it’s their children who pay the price. If a negative test is good enough for students with an exemption, why isn’t it good enough for those whose parents don’t want them vaccinated? These rules make no sense, and they have to go.