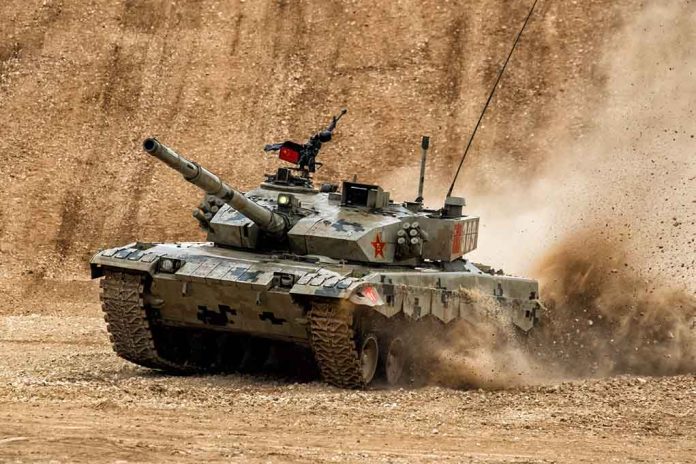 (UnitedVoice.com) – While China wants the world to believe all is well within its border, an economic crisis could destabilize the country ahead of President Xi Jinping’s run for a third term this fall. The question isn’t whether the country is experiencing an economic decline but rather how bad it is. China’s COVID shutdown policies likely contributed to the emerging crisis, but they weren’t the only reason. So, is it too late for the world’s largest populated country to reverse course?

Harkening back to images of Tiananmen Square, the Chinese military is reportedly sending tanks into the streets of several cities as unrest develops. Commercial construction is at a standstill, a mortgage crisis is underway in 86 cities, and supply boycotts are growing. Compounding the issues, citizens are making a run on their bank accounts. Yet, the communist government and the banks are allegedly preventing people from accessing their money through a show of force.

On June 27, The Center for Strategic and International Studies wrote China’s Zero-COVID policy is exacting a high toll on the Chinese economy. Analysts said it upended manufacturing, supply chains, and consumer spending, bringing the economy to a screeching halt. Some even believe the days of rapidly growing are over.

Others say the problem is more structural than just COVID policies. The property market is highly overextended. It makes up 30% of the Chinese GDP. Homeowners have threatened to stop making mortgage payments over a lack of work in construction. Large property construction companies in the country have defaulted, and citizens who put their life savings in the real estate market can’t sell their properties. Thanks to the lack of construction, banks are in deep trouble.

As citizens move to protect their money by pulling it out of the banks, the institutions are denying them access. In Henan, the Bank of China said savings accounts owners could not withdraw their funds, calling it an investment product. To aid against the run on these institutions, the government has reportedly sent in tanks to protect them from citizens as protests turned violent.

Banks Promise To Give Savings to Customers

On July 15, the Financial Supervision Bureau in Henan Province stated some savings account holders in small villages and towns would receive access to their money. Yet, only a select few banks appear to have made good on the promise. The institutions simply may not have the money.

Much bank revenue comes from local governments leasing land to real estate developers. Yet, many projects that began before the country’s COVID pandemic are underdeveloped. Additionally, construction companies aren’t buying land. That’s affecting money flowing throughout the economy, with banks at the center of the transactions.

So, will the military become even heavier-handed to control the frustrated population? Will China face another Tiananmen Square moment, or worse? Could Xi do something radical like invade Taiwan to distract from internal strife?