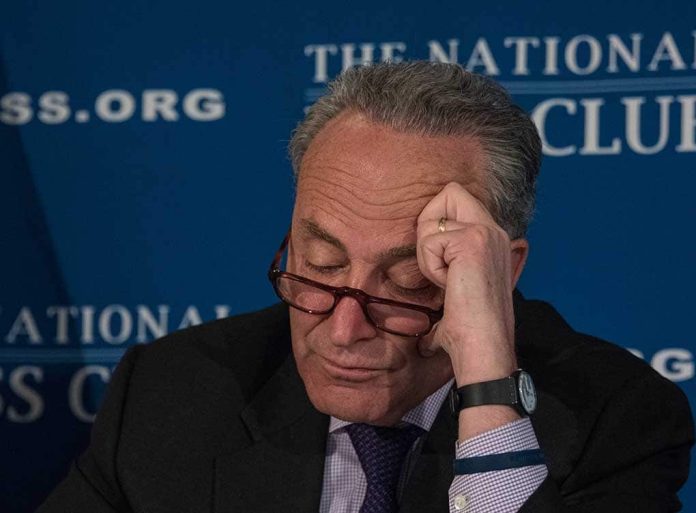 (UnitedVoice.com) – In the months since the 2020 election, Republicans in multiple states have passed laws to tighten voter security. Democrats took issue with the GOP strengthening the laws to protect elections, so they reintroduced their own bill. The For The People Act is something the Left has unsuccessfully tried to pass for a long time.

After the incident on January 6, the Democratic Party reintroduced the massive overhaul of the election system. They told the American people it was vital they pass the legislation to protect voting rights. But in a recent committee meeting, Senate Minority Leader Mitch McConnell (R-KY) made it clear he thinks that is a bunch of malarkey.

On Tuesday, May 11, McConnell and Senate Majority Leader Chuck Schumer (D-NY) faced off at a Senate Rules Committee meeting. The lawmakers met to markup S.1, the Senate’s version of the For the People Act.

Schumer launched into a tirade against former President Donald Trump, saying he poisoned “faith in our democracy” and caused an “insurrection” on Capitol Hill (the Senate acquitted him of the charge). He claimed further that Republicans are passing voter suppression laws so politicians can pick their voters instead of the other way around.

McConnell wasn’t having any of that. He slammed Schumer and the Democrats for changing their reasons for the legislation “constantly.” Most recently, they tried to make it seem as though the legislation is a reaction to an emergency wherein the Left has to “protect” voting rights immediately.

The Senate minority leader explained the Democrats are trying to “rewrite the ground rules of American politics for partisan benefit” with the legislation.

For the Democrats Act

Republicans say the legislation gives too much power to the federal government. It restores voting rights to felons, expands early and mail-in voting, prohibits states from cleaning their voting rolls less than six months before an election, and many other things. It would be the largest overhaul of the election system in decades. Not only will it allegedly make the system less secure, the GOP believes it will skew elections, giving Democrats an unfair advantage.

The Senate Rules Committee did not advance the bill on Tuesday.