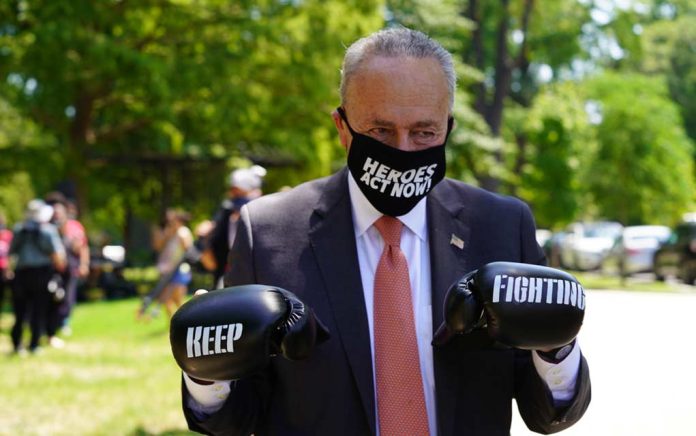 (UnitedVoice.com) – Senior Democrats aren’t even pretending to respect due process anymore — or a sitting Federal Judge. Senate minority leader Chuck Schumer (D-NY) tweeted on Tuesday that he refuses to meet Supreme Court candidate Judge Amy Coney Barrett, dismissing her as “a nominee of such an illegitimate process” and attacking her stance on Obamacare.

On Saturday President Trump nominated Judge Amy Coney Barrett, of the 7th Circuit’s appellate court, to replace the late Ruth Bader Ginsburg on the Supreme Court. Now Barrett is starting the rounds of Capitol Hill in the informal but customary process of meeting senators and allowing them to question her before her confirmation hearings. Unfortunately, many Democrats are choosing to play gesture politics by refusing to meet her – and Chuck Schumer is setting a bad example for his party.

With Democrats openly debating whether or not to meet the judge, Schumer sent a tweet on Tuesday afternoon stating that he would not. In what amounts to a boycott of the confirmation process, he challenged both the legitimacy of her nomination – which followed the correct Constitutional procedure – and her fitness to be a Supreme Court justice.

I am not going to meet with Judge Barrett. Why would I meet with a nominee of such an illegitimate process and one who is determined to get rid of the Affordable Care Act?https://t.co/7v4ES3HNM1

This isn’t the first time Schumer has publicly attacked Barrett. He was mocked for “partisan hatred” and “hysterical hyperbole” on Saturday night, after claiming that Barrett would “Hurt every single American” if her nomination is confirmed. In the same speech, he claimed his Senate colleagues were “united in opposition” to her.

Perhaps they all oppose Barrett joining the Supreme Court, but they’re not actually all on the same page when it comes to meeting her. Two members of the Senate Judiciary Committee – Mazie Hirono (D-HI) and Richard Blumenthal (D-CT) have already joined Schumer in refusing to talk to Barrett, but fellow committee member Cory Booker (D-NJ) has said he wants to talk to her. His main concern is whether or not she would recuse herself from any election-related issues, suggesting he realizes the Dems can’t keep her off the Court.

Senate majority leader Mitch McConnell (R-KY) says he plans to start confirmation hearings on October 12 and hold a committee vote on October 22. If he can meet that timetable, the full Senate will be called to vote before the election – and, with a simple majority required to confirm Barrett’s appointment, the Democrats don’t have the numbers to block her. It looks like Amy Coney Barrett is going to be a Supreme Court Justice whether Chuck Schumer meets her or not.