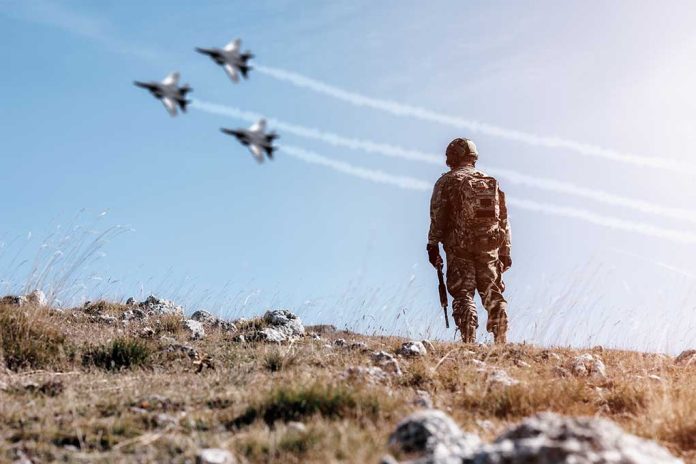 (UnitedVoice.com) – The situation in Ukraine continues to grow tenser by the day. As Russian forces regroup, Ukrainian resistance grows, escalating reckless shows of force in the region and sparking fears about what Putin will do next. The area is home to 15 nuclear power plants and reactors, each of which must be carefully monitored and maintained by skilled workers at all times. But what might happen if the critically important experts who possess the specialized knowledge to operate them safely became unavailable?

The answer is simple: it could prompt a global disaster.

Collateral damage in wartime is common. Yet, the quantity of operational nuclear power plants run by a limited number of essential workers, raise the stakes of an unprecedented global concern.

“With great power comes great responsibility” — and this is why Nato openly or secretly must limit the scope of Russia’s assault, now.

In the early days of the conflict, fighting at the Zaporizhzhya power station ended with troops setting an administrative building ablaze just hundreds of feet from the station’s six reactors. Meanwhile, over at Chernobyl, approximately 200 workers labor around the clock and under the thumb of Russian troops.

A video from the control room of the Zaporizhzhia Nuclear Power Plant amid Russia’s fire towards the facility.

“Immediately stop fire. You are you endanger the security of the whole world,” the control room says trough loud speakers.

These situations carry the risk of severe consequences for the entire globe if they go awry. A direct strike would obviously cause problems, but the real concerns center on the many ways in which wars and conflicts interfere with staff responsible for day-to-day operations.

United Voice reached out to Radiation Protection Dosimetry Technician Ruth G. for information regarding staffing requirements at nuclear facilities. As a contract technician to multiple US-based nuclear plants, her job involves monitoring contamination levels inside and around facilities.

Ruth G. explained that working in a nuclear power plant requires varying amounts of training, depending on the position. Jobs range from administrative personnel who handle the paperwork to radiation protection technicians who regularly monitor radiation levels along with maintenance and repair personnel.

Training times for nuclear reactor operation workers can take up to five years.

A nuclear plant can’t run by itself; it would likely melt down and take much of Europe with it, if its essential knowledge workers weren’t available for any number of reasons.

In the event of a staffing emergency, some facilities have limited access to knowledgeable former personnel they can call upon for assistance. Those options become limited or even non-existent during a military conflict.

Former NATO nuclear, biological, and chemical warfare technician Kenny C. warns that time is of the essence in the event of a reactor breach. “Everyone knows about the botched response to the nuclear incident at the Chernobyl Nuclear Power Plant in 1986.”

The facility’s No. 4 reactor suffered a meltdown due to a fatal mix of faulty reactor plans, poorly trained employees, and a routine test that went wrong. According to the  World Nuclear Organization, 350,000 people were forced to evacuate their homes as a result. Some 5,000 eventually developed thyroid cancer due to fallout exposure.

“Imagine the response to a nuclear meltdown if accidental kills or worse yet, low-discrimination air raids wiped out key members of one or more nuclear facilities,” Kenny C says. “Chernybol disrupted day-to-day life for months throughout all of Europe.”

Fears about the risk of a meltdown or the spread of isotopes by air are also well-founded, especially as missiles rain down on the region.

Airborne Warfare: Death From Above

The Russian air force has carried out out widespread bombing attacks across Ukraine. While many attacks are made with lighter guided weapons that don’t seriously threaten a reactor, local news reports also show Russian aircraft dropping conventional bombs.

Considering all of the armaments capable of damaging a reactor, the risk of a containment breach from a stray ordinance – or coordinated strike – is genuine. But the risk to local personnel is far, far greater. Furthermore, bringing skilled personnel in from outside the country in the middle of a war isn’t exactly an easy task, either.

Continuing, Marcus discussed the indiscriminate nature of hitting intended targets from high altitudes. “It’s not like zeroing in on a target using laser sophisticated control systems.” Instead, “It’s more like aiming in the general direction of the intended target and hoping for the best outcome.”

That indiscriminate nature is exactly why people should be so concerned. An air raid strike that hits an apartment building, a local hotel, or even a congested highway in the middle of a morning commute could obliterate personnel in an instant.

Consequences of a Nuclear Incident in Ukraine

It may seem unthinkable that anyone would intentionally attack a nuclear power plant or target facility personnel. Yet, in times of war, rules tend to change.

While the international community would undoubtedly view a direct, unmistakable attack on a nuclear reactor to expose its core as a severe breach of international law, at that point, it would be far too late. The damage itself would trigger extreme global consequences.

That’s where the term “scorched earth” comes in. Direct obliteration of a facility directly is ultimately a form of mutually assured destruction. It’s like a catastrophic heart attack with very little chance of recovery.

Harming or killing plant personnel, on the other hand, is akin to a slow-growing, insidious cancer with the potential to set off a chain reaction of events. While the most serious damage might not occur in minutes, the potential for disaster is just as high.

Air strikes continue to rain down in or near highly sensitive zones, such as Mariupol’s Zaporizhzhya nuclear plant and the Kharkiv Institute of Physics and Technology’s nuclear research facility. With every strike, the risks of a more serious problem grows.

The only guaranteed solution to the question of wartime nuclear plant safety in Ukraine is reaching a peaceful end to the conflict. Whether or not it’s possible to achieve that outcome, however, remains unclear at the present point.

Workers are currently risking their lives to operate Ukraine’s plants safely every single day. They must be protected at all costs with the same vigor and vigilance afforded to any other NATO country border or essential resource. Russia must not be encouraged to continue this war — but what will it take for them to finally start listening?

Ukrainian Energy Minister German Galushchenko recently told local journalists nuclear power plant operators have managed to avoid the risk of a potential nuclear catastrophe so far. “Yes, our [nuclear] engineers are true heroes,” he stated. However, he warned that it’s impossible to ensure nuclear security during a military conflict” and called for a 30-kilometer (18.6 miles) demilitarized zone around Ukraine’s atomic facilities.

Galushchenko also appealed for help from the International Atomic Energy Agency (IAEA), the United Nations (UN), and the Organization for Security and Co-operation in Europe (OSCE).

IAEA Director General Rafael Mariano Grossi echoed that sentiment during a March 2 emergency meeting of the agency’s board of directors. He warned Russia/Ukraine war marks the first time military conflict broke out in the shadow of extensive nuclear power facilities.

Grossi called for restraint by all parties, warning that a nuclear incident “could have severe consequences, aggravating human suffering, and [creating] environmental harm.”

Most recently, senior officials from the IAEA and the European Union (EU) met to discuss nuclear safety and security in Ukraine on March 15. EU Special Envoy Marjolijn van Deelen expressed the union’s “grave concern… [regarding] indiscriminate attacks on several nuclear sites” in Ukraine. Deelen also affirmed the EU’s commitment to working with the IAEA to ensure the safety and security of Ukrainian nuclear facilities.

Head of the state nuclear energy company Energoatom Petro Kotin said that an agreement on security guarantees for nuclear facilities and material is being created between Ukraine and the International Atomic Energy Agency.

The following day, the Kyiv Independent reported that Petro Kotin, the head of Ukraine’s state-run nuclear energy company, and the IAEA are creating an agreement to provide security guarantees for the wartorn nation’s nuclear power sites.

President Volodymyr Zelenskyy seems to fully understand the critical need to prevent an all-out air war in Ukraine. During an emotional speech to Congress on March 16, he implored President Joe Biden and US officials to declare the country a no-fly zone.

This simple shift would shield Ukraine’s nuclear power plants from harm and make it much harder for Russia to kill staff — or terrorize the people — with air strikes from above.

But Zelenskyy was also careful to offer alternative solutions. According to Royal Military College of Canada Professor Jane Boulden, there may be a very good reason for that.

“There’s zero question that to engage in some kind of no-fly zone over Ukraine is to effectively enter into a war with Russia,” she told reporters at The Star.

Boulden believes entering into a global conflict with Russia would also bring nuclear warfare into the picture, a situation that could culminate in mutually assured destruction. That’s another powder keg scenario with the potential to trigger an unmitigated disaster.

President Vladimir Putin has already threatened to take action against countries standing in defense of Ukraine. US officials continue to push the line by sending defense equipment and humanitarian aid to the region. Experts worry that declaring the region a no-fly zone could push the Kremlin to a point of no return, inspiring him to attack other NATO allies.