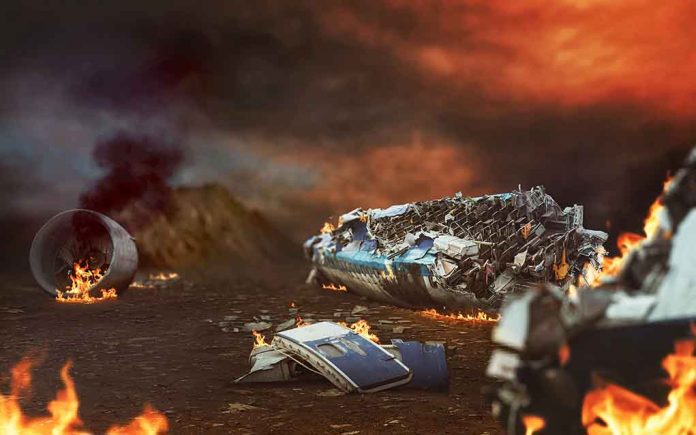 (UnitedVoice.com) – Seventy-two passengers and crew members boarded a Yeti Airlines flight on Sunday, January 15. The flight plan showed the plane would travel from Kathmandu, Nepal, to Pokhara, a tourist town about 80 miles away. They were all dead a short time later.

Around 10:50 a.m., the pilot contacted the tower at Pokhara airport. The pilot asked to change the runway minutes before controllers expected the plane to land. The airport approved the request, but the flight never arrived. It went down in a gorge just a mile away from the airport. The violent crash littered pieces of the aircraft and victims across the riverbank.

EXPLAINER: Why did Nepal plane crash in fair weather? (from @AP) https://t.co/8BHMOgwEBH

A neighborhood near the crash site captured a video of the plane. The footage shows the aircraft flying normally but appears to show a fire starting near one of the wings. It remains in the sky, on fire, but then tilts and rapidly descends before it crashes.

A passenger on the plane was on Facebook Live streaming just before the aircraft’s scheduled landing. Everything seemed great in the video, but then red flames engulfed the screen. It seems the victim captured the crash that ended his life.

Rescue workers searched the crash site in the days after, but they don’t believe any passengers on board, including six children, survived. Nepal’s police told the BBC they found the black box and voice recorder.

The co-pilot on the flight, Anju Khatiwada, was only in the profession because her husband, Dipak Pokhrel, died in another Yeti Airlines crash in June 2006. After her spouse died, she decided to pursue a career in aviation. That decision cost the woman her life 16 years after her husband passed away under similar circumstances.

The crash investigation is underway. The event renewed discussions regarding flight safety in the small, mountainous country. Critics are raising questions regarding equipment age, regulation enforcement, and oversight to improve flight safety.