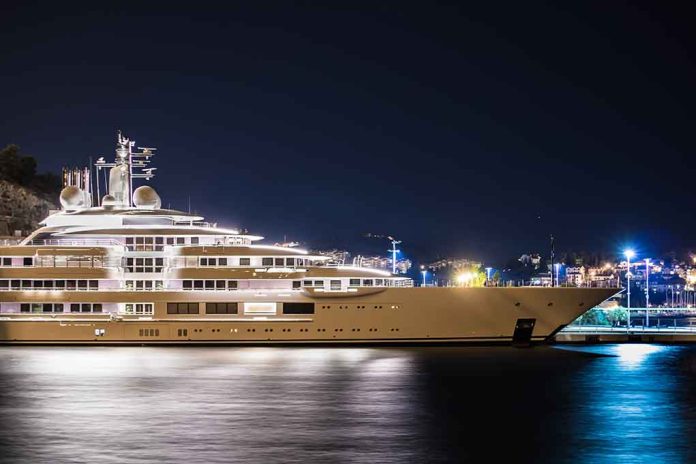 (UnitedVoice.com) – Governments around the world are seizing the assets of Russian oligarchs. At the same time, there’s a mysterious superyacht in Italy that could be owned by Russian President Vladimir Putin. The yacht made headlines this week when its crew members made a shocking move.

According to the New York Times, the massive yacht was docked in central Italy’s port of Marina di Carrara in the fall of 2020. It arrived in the area just four months after being built, but it’s unclear who owns the 459-foot-long yacht. The Russian crew members who have lived on it since it docked abruptly left their jobs this week.

Paolo Gozzani, of Italy’s General Confederation of Labor trade union, told the Times the crew was replaced by British workers. He said he doesn’t care if Putin owns the $700-million boat, but he’s worried about the “repercussions on shipyard workers if police impound or confiscate the vessel.”

In a dry dock in Italy's #Tuscan stands the "#Scheherazade", the most infamous yacht due to speculations it could belong to #VladimirPutin.

The 140-metre craft worth an estimated $700 mn is the subject of a probe into its ownership by Italy's police.https://t.co/UeRtk9owdG pic.twitter.com/pCpAXUGtHp

Although the fate of that particular superyacht is unknown, there are others in question. Two yachts linked to oligarch Roman Abramovich docked in Turkey recently. The ships reportedly cost $500 million each and now they’re out of the reach of both EU and UK sanctions.

Governments have seized at least eight superyachts since the war in Ukraine began.