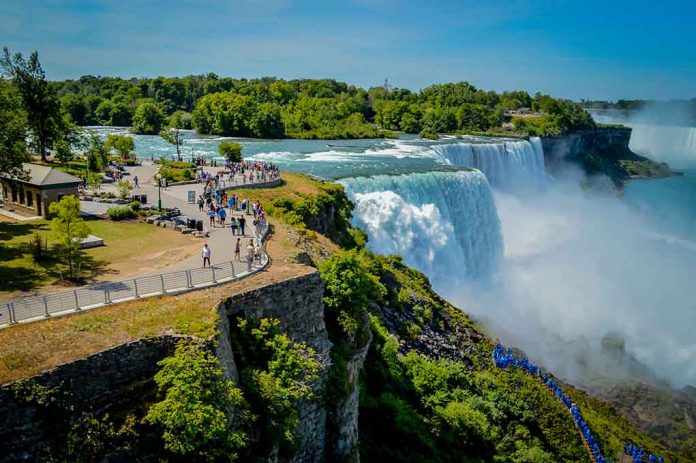 (UnitedVoice.com) – On Wednesday, December 8, Niagara Falls, New York, police received 911 calls about a vehicle entering the Niagara River. When officers arrived on the scene, they saw a black car about 100 to 150 feet away from the brink of the American Falls at Niagara Falls State Park. Park Police were unable to mount a rescue attempt — that’s when they called in the US Coast Guard.

A USCG team from Detroit arrived on the scene about two hours after the witnesses reported the accident. They lowered a Guardsman on a rope to the vehicle. He used an axe to get into the vehicle and rescue the woman behind the wheel of the car. A helicopter brought the two to land where EMS determined the victim had died.

New York State Park Police Capt. Christopher Rola told Buffalo News that it seems the victim, identified only as a local woman in her 60s, appeared to have entered the river intentionally near a pedestrian bridge that takes park visitors to Goat Island. He said the cause and manner of the woman’s death wouldn’t be determined until an autopsy is completed.

As of Thursday, the car had flipped upside down and drifted to roughly 40 feet before the brink of the Falls.

We've got eyes on the "Niagara Falls Car" that moved overnight closer to the brink on the American side at #ProspectPoint and it's budged into a rocky shallow. No sign or attempts by officials to retrieve it, yet. pic.twitter.com/67qT7ulxxk

Approximately 20 to 30 people go over the waterfalls at the park each year. Most of those are intentional acts by people who want to end their lives.

If you are experiencing thoughts of suicide, please reach out to the Suicide Prevention Hotline at 1-800-273-8255.