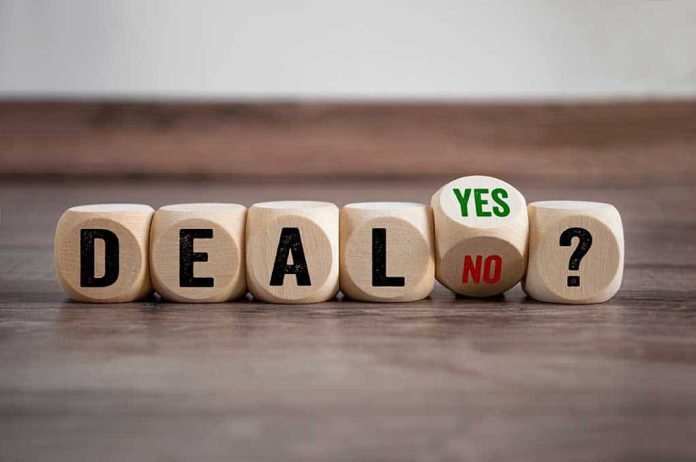 (UnitedVoice.com) – Doomsday is almost here for the lynchpin of Joe Biden’s domestic agenda. The squeeze is on as House Democrats search for votes to ensure the Senate’s bipartisan infrastructure bill goes to President Biden’s desk this week. However, it isn’t going to be easy for House Speaker Nancy Pelosi (D-CA). She’s boxed into a corner with her own party testing her supposed strong political skills like no other time in her career.

Here’s the problem for the Speaker: She promised the Left the House would not vote on the bipartisan deal unless the partisan $3.5 reconciliation package accompanied it. In August, she also promised Moderates a vote on the bipartisan agreement by September 27. Either way, she’s breaking a promise. Now, the war of words is escalating. Apparently, the president believes he can broker the deal, but his attempts have been in vain so far.

For Conservatives, this is great news. However, we can’t count our chickens before the eggs hatch. Democrats have a way of coming together. Here’s the key question: Is the division too great this time?

Liberals and Moderates Threaten One Another

Why is the battle intensity over this legislation different from any other time? The Left is not popular in America. In the latest survey about American political ideology, most Americans consider themselves Conservatives (36%) or Moderates (35%). Only 25% identify as Liberals. In January, the Left found itself in a strange and precarious situation. The minority held the majority in Congress.

The Left knows its majority won’t last beyond 2022. They may not get this opportunity again for 10 or 20 years. It’s a do-or-die situation. They must pass the legislation now or risk never shoving their priorities down America’s throat. They don’t care if Americans approve or disapprove. They’re playing a long game just like they did with Obamacare in 2010. In the end, that worked out for Democrats despite historic losses to Republicans in Congress in 2012 and 2014. Once a law is in place, it’s nearly impossible to get rid of it. That’s what Democrats are counting on.

So, when Moderates threw a wrench into their radical “human” infrastructure plan, the Left went after them as if they were Republicans. The problem is, it didn’t work. Sitting on the sideline is the president who claimed in 2020 he was a Moderate who defeated the Socialists. Now, he’s advancing the Socialist agenda, and the Moderates aren’t paying any attention to him.

It’s a classic standoff, and neither side is backing down. The Left says if Pelosi follows through on the vote of the bipartisan infrastructure plan on Thursday, they’ll torpedo it. Moderates say if Progressives do that, they’ll blow up the reconciliation bill.

The War of Words vs. Reality

On Tuesday, Congressional Progressive Caucus Chairwoman Rep. Pramila Jayapal (D-WA) said half of her caucus would sink the bipartisan bill if it comes to a vote on the House floor. Squad member Rep. Rashida Tlaib (D-MI) was harsh with the Speaker. She called Pelosi’s reversal a “betrayal.”

The socialist leader himself, Sen. Bernie Sanders (I-VT), called on House Democrats to reject the bipartisan deal until Senate Democrats approve the “human” infrastructure deal. He claims the Left promised the two would go together. He has a point. President Biden initially supported linking the two bills before there was a firestorm against the idea. If Biden said that publicly, what did he or the Democratic leadership promise behind closed doors?

How Could the Bipartisan Infrastructure Deal Pass?

It appears there are only two ways the bipartisan bill passes. First, are there enough Republicans who will vote for the legislation? There’s no assurance that will happen. Or, will moderate Sens. Joe Manchin (D-WV) and Kyrsten Sinema (D-AZ) cave to the Left and vote for the reconciliation proposal? Biden summoned them again on Tuesday. Manchin said he made no assurances, and Sinema told the president again she would not vote for the bill over its cost.

So, for the first time, Pelosi may be putting legislation to a vote, not knowing if it will pass or if the divisions are so great both bills will die.

Stay tuned. There’s a lot of behind-the-scenes maneuvering. The question is, will it change anyone’s mind at this point?