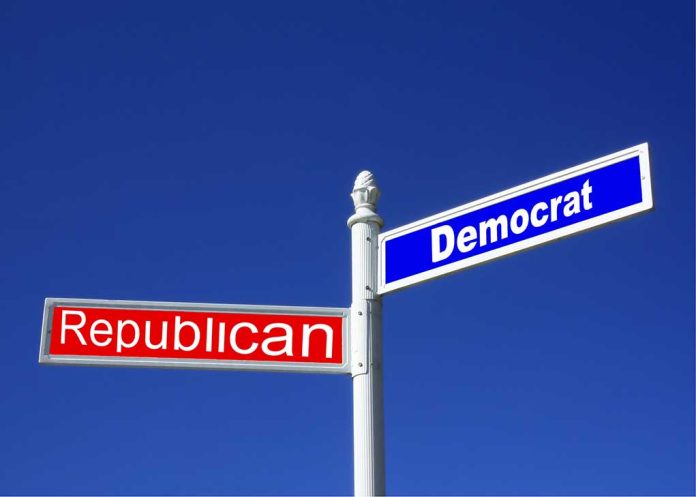 (UnitedVoice.com) – The 2022 midterms are shaping up to be one wild political ride. Seats once thought safe are coming into play on both sides of the aisle. For example, Pennsylvania might elect a Democratic senator after Republican Sen. Pat Toomey decided not to run for a third term in office. Meanwhile, the Left could have a tough time holding onto the governor’s mansion in Oregon after decades of winning gubernatorial elections there. Now, even the typically deep blue state of New York is in play.

New York Governor Kathy Hochul (D) is running for reelection against Republican Rep. Lee Zeldin. On October 15, Real Clear Politics moved the gubernatorial race in NY from “Leans Dem” to “Toss Up.” The latest rating comes one week after the polling firm moved the race from “Likely Dem” to “Leans Dem.”

Zeldin celebrated the latest decision in a Twitter post. He told his followers that his campaign had “just 24 days to go until [they] FIRE” the current governor.

🚨Our race was just moved to TOSS UP by @RealClearNews! We have just 24 days to go until we FIRE @KathyHochul & save our state. It’s not too late for Hochul to come out of hiding & do multiple debates with me across New York, starting immediately! pic.twitter.com/eYrm1TUYnD

The conservative has been running a tough-on-crime campaign as crime rates in the state rise. He has repeatedly slammed the Democratic governor for not firing Manhattan District Attorney Alvin Bragg. In fact, he said he’d get rid of him on his first day in office because the DA has failed to uphold the law.

My first action as Governor on January 1st will be to notify Manhattan District Attorney Alvin Bragg that he is being FIRED for his refusal to enforce the law time and again. https://t.co/REdY9Ecg7O

Zeldin has made big promises to his constituency if they elect him as governor. Newsmax reported that he appeared on Fox Business’ “Sunday Morning Futures With Maria Bartiromo” to discuss what he would do if the people of the Empire State elect him to office. The congressman said he wants to “have a very active day one” and intends to accomplish many things in the first 100 minutes.

The Republican pledged to suspend the state’s cashless bond program and other “pro-criminal laws.” He said he would also “force the legislature to come to the table to negotiate an improvement” so law-abiding residents can take control of the streets.

Zeldin also intends to address the immigration issue in the state at some point. Republican Governor Greg Abbott (TX) has been busing asylum seekers into the state after US Citizenship and Immigration Services processes them. The congressman said he thinks they are being “incentivized and rewarded” for coming to the US, and he thinks the federal government needs to secure the border.

Voters head to the polls on Tuesday, November 8.