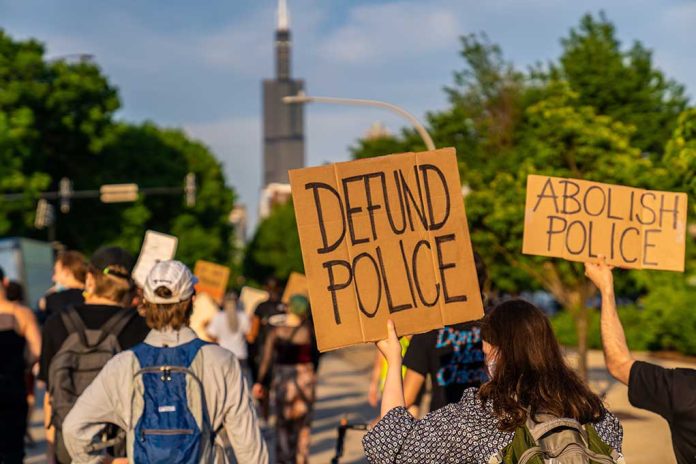 (UnitedVoice.com) – In the wake of George Floyd’s murder by former Minneapolis police officer Derek Chauvin in 2020, many activists called to defund the police. They wanted law enforcement stripped of part or all of their funding, forcing them to restructure. Proposals included using the funds instead to pay for mental health counselors and other professionals who could respond to some emergency calls.

Many Democratic lawmakers at the local, state, and federal levels jumped on the defund the police bandwagon. Rep. Cori Bush (D-MO) was among the most vocal. Time and again, she demanded police lose their funding. As most of her Leftist colleagues try to distance themselves from the slogan and movement, she still embraces it.

On Wednesday, October 5, Bush sat down with CNN host Don Lemon for an interview. He asked the congresswoman about the defund the police slogan and the backlash against it. Fox News reported he asked her whether Progressives might have hurt the party’s chances of winning in the midterms by using the controversial phrases. Bush responded, saying she didn’t think it hurt the Democrats’ chances at all. She claimed there wasn’t any “data that actually shows that saying ‘defund the police’ cost actual elections.” Instead, she blamed candidates for their campaigning style.

When Lemon asked Bush if she would do it all over again. She responded, “Absolutely.”

Rep. James Clyburn (D-SC) and others believe the movement to strip law enforcement agencies of their money absolutely hurt the party in 2020 when Dem House candidates lost their seats, but Joe Biden won the presidency. In 2021, he told The New York Times his constituents didn’t agree with the phrase, and it had “cu[t] the throats” of Democrats. He likened it to the 1960s phrase “burn, baby, burn.”

In 2020, Former President Barack Obama said the phrase turned voters away. He explained that “snappy” phrases alienate the people candidates need to elect them and make it a lot harder to accomplish any goals. Even former President Bill Clinton warned that they do more harm than good.

Bush claims no evidence supports the idea that the phrase caused elections to swing the other way, but polling certainly shows the American people don’t support the movement. A 2021 USA TODAY/Ipsos Poll found only 18% of respondents supported it. Still, Bush is pushing it as crime rates skyrocket. It doesn’t seem to make logical sense. What do you think?