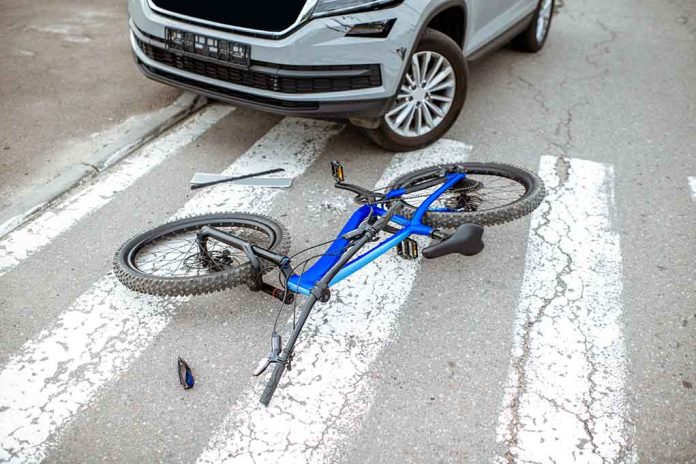 Democrat Official’s “Hit And Run” REPORTED – She Ran Away!

(UnitedVoice.com) – Americans put a tremendous amount of faith in their officials when they elect them to office. Residents in one New Jersey city are calling on a Democratic councilwoman to resign after she broke that trust in a shocking way.

On July 19, Jersey City Councilwoman-at-Large Amy DeGise allegedly drove through an intersection and struck 31-year-old Andrew Black, an Uber Eats bicyclist. A video of the incident shows the victim hitting the vehicle and falling off of his bicycle. The Democratic official reportedly just drove off without even stopping to see if the man was okay.

Councilman Frank Gilmore told NBC 4 New York that DeGise’s decision not to stop was hard to witness. He said it was “a matter of public trust” and human decency.

A Change.org petition with more than 4,200 signatures as of August 2 calls for her resignation, claiming the lawmaker, the daughter of powerful Democratic Hudson County Executive Tom DeGise, made “no effort to avoid the cyclist,” check on him after, or file a report with the police.

BACKLASH. Calls for @Amy_DeGise to resign intensifying. The first of more demos to come, say organizers. "Call the mayor and let him know that this is unacceptable!" @StevenFulop @bikejc @NJSpotlightNews @SafeStreetsJC @Oseguera2020 pic.twitter.com/u8KFdGDyBn

Phil Swibinski, a spokesman for the councilwoman, told the Hudson County View the lawmaker “has no intention of walking away from the commitment she made to serve” her community. He said not only wouldn’t she resign, but she plans to continue public service in the future.

Do you think DeGise should resign over the incident?