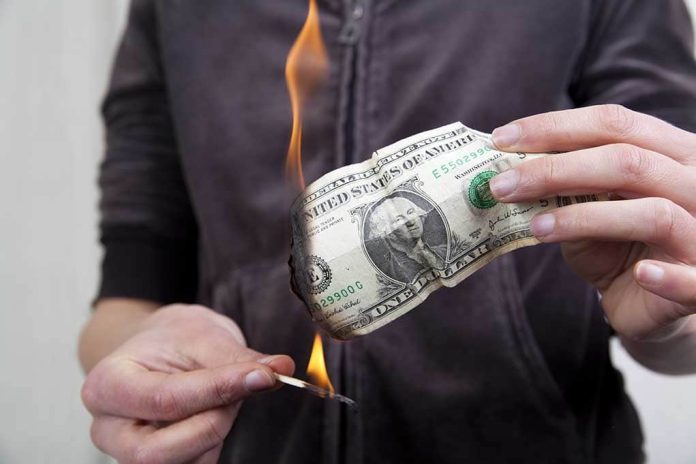 (UnitedVoice.com) – Over the last 16 months, Congress passed six major bills authorizing over $5 trillion in new spending to keep America afloat during the pandemic. The amount of money being discussed is incomprehensible. A trillion one-dollar bills would stretch from the earth to the sun. It would take a plane flying at Mach 1 (the speed of sound) 14.4 years to reach the end of those bills laid end to end. Now, do that five times.

On Tuesday, Senate Majority Leader Chuck Schumer (D-NY) announced a framework for the Democrat’s “human” infrastructure proposal was agreed upon in the Senate Budget Committee led by socialist Sen. Bernie Sanders (I-VT). The proposal is $3.5 trillion in addition to the $1.2 trillion bipartisan package agreed upon in June for traditional infrastructure items. While Schumer and Sanders are running around giddy and excited like schoolboys, there are no guarantees that all 50 Democrat-leaning senators will get onboard. In fact, the plan overshoots what one Senator stated he’d willingly vote for if the proposal comes up on the Senate floor.

“Human” Infrastructure Is Far From a Go at This Point

There are several challenges with getting this bill passed. At this stage, Wile E. Coyote will catch the RoadRunner before the human infrastructure proposal bill becomes law. There are numerous reasons for dangers lurking ahead for Democrats. It starts with the timeline and goes berserk from there.

As soon as next week, Schumer wants to bring the bipartisan traditional infrastructure package up for a vote. Yet, that’s an extremely tight deadline. Lawmakers still haven’t drafted a bill around the framework, and that’s where the real give and take occurs as lawmakers jockey to put their imprints on legislation. At that point, it could blow up fast as the costs rise. Unfortunately, that’s not even the biggest challenge. The Democrat’s problem is coming from the far left of the party.

Democrats need total unity to pass the bill. If one Democrat breaks away, the legislation is in deep jeopardy, and therein lies the true challenge of governing in a hyper-partisan atmosphere — as if there were both a bulletproof majority and mandate from the public when neither exists. Progressives want a guarantee that their human infrastructure bill will pass before voting on the bipartisan measure, and they threaten not to vote for it if they don’t get a side-by-side vote. There’s no way to do that on a controversial bill that is already half the size of what they wanted. Schumer is signaling that it could be fall before the reconciliation bill gets a vote.

While the Progressives and Socialists potentially throw temper tantrums, the real power comes from moderate Sens. Joe Manchin (D-WV) and Kyrsten Sinema (D-AZ). Last week, Manchin plainly made it clear he wouldn’t vote for a bill over $2 trillion and couldn’t pay for itself without adding to the debt. Sinema signaled much the same but without the specifics.

Then there are the Republicans. While they are primarily on the sidelines watching, they are applying public pressure to moderate Democrats in red and purple states. Add President Biden’s recent gaffe, and like a bull in a china shop, Biden nearly destroyed everything with a few words. He suggested he wouldn’t sign the bipartisan deal he was part of formulating if he didn’t get the Democrat’s massive reconciliation bill side-by-side on his desk. He eventually took that back, but the damage was already done. Some GOP Senators are skeptical now, after hearing Biden’s words, and could pull their support as a means to derail the reconciliation package.

There is a lot of political strategy and maneuvering surrounding the two infrastructure bills. The Left wants it all but won’t get it. Will they follow through and threaten to kill the bipartisan legislation? Will the Moderates stay true to their words, or will they cave under pressure? Will the GOP successfully put on a public campaign that forces some Democrats to think twice?

Things are coming quickly to a head.