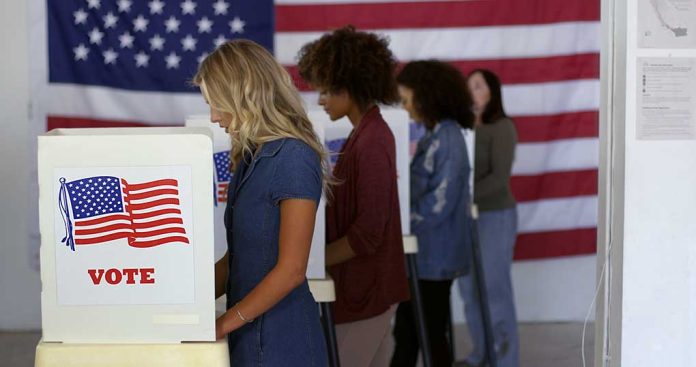 (UnitedVoice.com) – Over the last year, Democrats have been on a tear to upend how the government functions and Americans go about their lives. Unfortunately for President Joe Biden and congressional Democrats, they couldn’t convince a single Republican to go along with their reckless agenda. Biden’s counter is that the GOP is obstructionist. Therefore, Democrats must defeat them by any means possible. There was just one problem—two moderate Democrats stood in the way.

In 2020, the Left began calling for eradicating the filibuster, which we’ve extensively covered, so there’s no need to get into the weeds on how it works or its importance. What is important is that late on Wednesday, January 19, Sens. Joe Manchin (D-WV) and Kyrsten Sinema (D-AZ) voted against their party’s effort to carve out the filibuster so that Democrats could act unilaterally to pass their supposed voter election reforms. Now, the only real option Democrats have to pass their semi-socialist and election hijacking proposals is to take their agenda to the voters. The ones who disagree with them, according to virtually every poll.

Is Biden’s Radical Agenda Over?

Where Manchin and Sinema are concerned, the biggest issue they have with their party is not necessarily the extreme agenda. It’s the unwillingness of their fellow Democrats to recognize two parties represent differing views, and they could irreparably divide the country if they don’t work together. In this regard, the two Senators are considering the country over party.

At this point, it’s clear that after a year of party infighting, Manchin and Sinema are dug in and are not budging on their principles. This leaves the rest of the party in a real predicament. For one, moderate House Democrats are on record with their radical votes that don’t align with voter concerns. If Virginia and New Jersey’s 2021 elections were any indications, Democrats are in real trouble with suburban Biden voters. They expressed in exit polls that the economy, inflation, and education for their children were top issues. Democrats have all but ignored them as they fought over social and climate change proposals, detached from everyday voters.

So, without Manchin, Sinema, and 10 Republicans, it’s clear the Biden/Democratic left-wing agenda is dead without eradicating or carving out the filibuster. Democrats say they will continue to fight among each other to get it done, but that’s neither practical nor sustainable. At some point, they need to move on.

Biden Prepares for Midterms by Questioning What Republicans Stand For?

During a press conference on Wednesday afternoon, Biden scolded Republicans as obstructionists and tried to set the upcoming election narrative. He demanded to know what Republicans stand for, as if he didn’t know.

Standing against something means there is something behind it that one is standing for… For the last two years, Democratic governors locked down their states, restricted liberties (especially religious liberties), pushed Critical Race Theory (CRT), empowered teacher unions over parents, and enacted draconian vaccine passport mandates.

On the national level, President Biden and his administration:

That’s still not the tip of the iceberg.

Democrats were warned by their own economists not to pass the COVID relief bill in March 2021 over concerns it would spark inflation. Biden enacted a war on energy that forced gasoline prices to skyrocket. And, in a perfect self-inflicted storm, Democrats are responsible for wiping out wage gains due to the massive spike in inflation that Americans are now enduring. However, Democrats propose more welfare programs that trap people in government dependency instead of incentivizing hard work and entrepreneurship.

Is it even worth talking about the botched Afghanistan withdrawal, or the fact that another Democratic president may allow Russia to invade Ukraine?

So, ask yourself again, what do Republicans stand for? It could be that the GOP believes the United States exists to:

Mr. President, if that’s how you want to tee up the 2022 midterm and 2024 presidential elections, you might want to rethink that strategy.