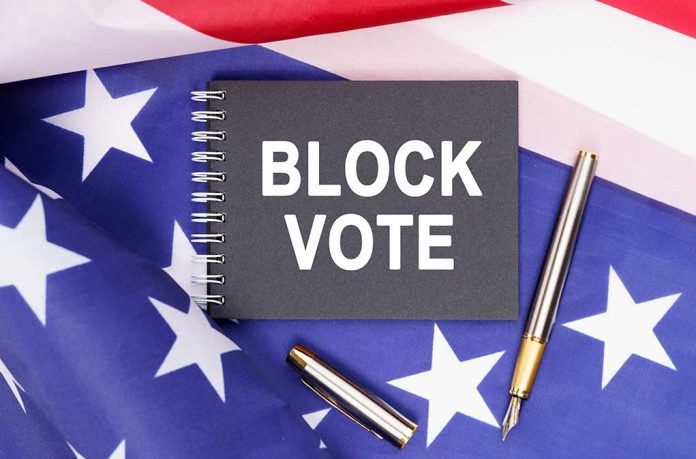 (UnitedVoice.com) – The Democrats were warned, but they refused to listen. Big surprise, right? On Friday, July 16, Senate Majority Leader Chuck Schumer (D-NY) signaled that he intended to call for a vote on the bipartisan infrastructure legislation on the Senate floor. On Wednesday, he followed through. There’s just one problem. It was a fake vote.

Schumer forced a vote on legislation that doesn’t yet exist. A bipartisan group of senators is working to finalize a $1.2 trillion infrastructure agreement. At the time of the vote, on Wednesday afternoon, there was nothing for Senators to read. Sen. Minority Leader Mitch McConnell (R-KY) warned for days that Republicans would filibuster and prevent a vote while the bipartisan group still worked out important details of the legislation. Of course, there was a dubious reason for Schumer’s tactic.

Why Did Schumer Force a Vote Without a Bill?

Sen. Bill Cassidy (R-LA) said the GOP objection was simple. One can’t vote for something if they don’t know what it is or entails. Both sides expressed optimism that a vote will take place as early as Monday. There is widespread agreement on the bipartisan infrastructure bill to build and modernize roads, bridges, water systems, railroads, airports, and other physical infrastructural needs.

The reality is the Democrats are paying political homage to the bipartisan deal and want it out of the way as quickly as possible. Waiting in the wings is the whopping $3.5 trillion partisan reconciliation bill they are actually eager to begin work on to fulfill their long-term vision of radicalizing America’s dependence on government. If passed without modifications, the Democrats propose to:

Once the Senate clears the bipartisan traditional infrastructure deal, all eyes turn to the elephant in the room. On Wednesday, the Democrats were supposed to begin moving forward on the budget resolution as well. When it does arrive for debate next week, that’s when the real drama will begin.

Schumer needs all 50 Democrats to vote for the bill for it to pass in the Senate. That’s an enormous order. Everyone is waiting intently to see what moderate Sens. Joe Manchin (D-WV), Kyrsten Sinema (D-AZ), and Jon Tester will do (D-MT). Over the last few weeks, each signaled their concerns with the bill and suggested they may not give the Left everything they want.

On July 15, Manchin reiterated that he wouldn’t vote for a bill over $2 trillion. More importantly to the survival of the proposal, the West Virginia Senator said he’s “very, very disturbed” about the climate change proposals that would eliminate fossil fuels. Manchin comes from deep red, coal-producing West Virginia. Manchin took a shot at the Left by stating some were sticking their heads in the sand, and if they believe eliminating fossil fuels in America will end global climate change, it won’t. He added, “if anything, it would be worse.”

If any one of the three Senators strip proposals the Left is clamoring for, it could spark a civil war within the Democratic Party. Initially, Sen. Elizabeth Warren (D-MA) threatened to blow up the bipartisan infrastructure deal if Democrats didn’t pass their partisan proposal alongside it. If the Senate passes it on Monday, Warren’s leverage is all but gone. However, in the House, it’s a different story. House Democrats could reinsert the Left’s utopia vision, and the process in the Senate would start all over again.

All that to say, this isn’t as easy as Democrats thought it would be six months ago. It was never going to be despite their shouts of joy at winning a narrowly divided House and evenly divided Senate. The big question is, will Democrats compromise with one another to pass a bill? In the end, they likely will, but they’ll grumble as they do it. They realize this is their one big chance and that the odds of retaining one or both chambers in the 2022 midterm election are unlikely.

A lot is at stake for America in the coming weeks.

Stay tuned! It’s about to get interesting.