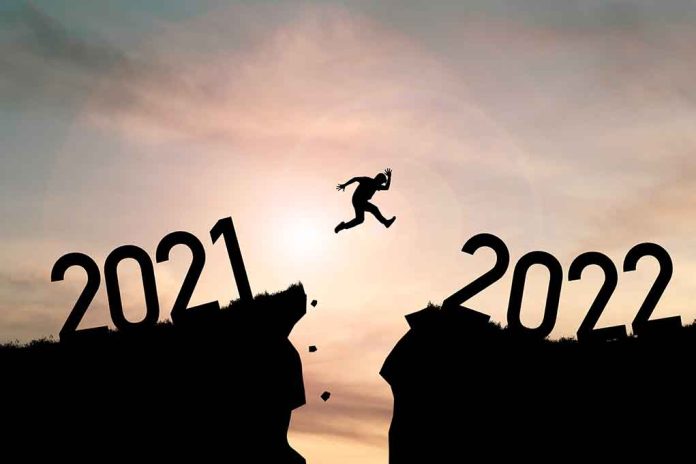 (UnitedVoice.com) – In December of 2020, just one short year ago, Democrats prepared to enter the new year excited and exuberant. Why wouldn’t they? For the first time since 2009, they controlled the House, Senate, and White House, albeit by razor-thin margins. Never mind that… the Democrats and President Joe Biden shifted hard left and believed they had a unified party. Largely, it was, except for two pesky moderate Senators.

What 2021 demonstrated is razor-thin majorities are not voter mandates to pass sweeping social legislation. While the Democrats came into 2021 like lions, they are entering 2022 as wounded animals, limping due to self-inflicted wounds. As a result of the Dems overreach, the GOP is prime for a potential tsunami in November 2022. The question is, how big will the tsunami be? That depends on whether Democrats are still limping or if Republicans politically rescue them in 2022.

Don’t Overpromise When You Know You Can’t Deliver

The early warning signs existed, but giddy Democrats believed they could get their members in line. Off the heels of the 2020 election, House Republicans successfully defended every incumbent seat and flipped 16 Democratic ones. That led moderate Democrats to blame the Left and suggest defunding the police and socialist narratives needed to go away unless the party wanted to lose badly in upcoming elections.

Suffice it to say, the Moderates didn’t heed their own warnings. They, too, moved left. They can claim the Moderate label because Moderates didn’t move to the extreme left with the Squad in their rhetoric. In politics, words are bronze, but votes are gold. Is there a news headline where one Moderate House Democrat voted against the Left? They may have while they disputed some points in a committee, but when it came to the votes that mattered, Democrats voted together to pass the Left’s agenda in the House. The only objectors to the radical Democrats came from Sens. Joe Manchin (D-WV) and Kyrsten Sinema (D-AZ).

Democrats knew exactly where Manchin and Sinema stood on the issues. They tested the two Senators, and they failed. They promised something they knew they couldn’t get. Now, the radical social and climate change Build Back Better proposal is dead, at least for this year. If Democrats don’t concede to revisions or scaling it back even more if Manchin’s worries about inflation persist, it could die altogether.

The fact is, voters didn’t vote for the radical changes Democrats are proposing. Polls now show most voters prefer Republicans over Democrats. That’s despite ridiculous Democratic claims Republicans are insurrectionists and want to destroy democracy. That kind of narrative demonstrates just how badly their self-inflicted errors wounded them.

Biden Has the Biggest Overreach of Them All

In 2020, Biden ran as a self-declared Moderate. He’s not even close to the center of the political world. He’s a far-Left extremist who’s carrying the kool-aid for Democratic Socialist Sen. Bernie Sanders (I-VT). Unfortunately, it’s worse than that. He promised to unite the country and became a divider. Biden vowed to fix Trump’s supposed problems with COVID-19… he made them worse.

Then the botched Afghanistan military withdrawal happened as inflation started hitting at home and store shelves emptied. Illegal immigration grew out of control, and crime surged across big Democratic-led cities. Biden’s approval numbers collapsed from the low fifties in May to the low forties and high thirties in December. Many Independents are bailing on him.

There’s a lesson to be learned for Republicans. In 2022, don’t make promises you can’t keep. Biden and the Democrats will do that for you. Voters no longer trust the president’s leadership. Don’t give them a reason not to trust yours.

Democrats are limping and wounded headed into 2022. Before the midterm elections, reality may set in. They are in big trouble with voters. Until then, the GOP shouldn’t get overconfident and promise the impossible. Eleven months is a long time away, but not that long.