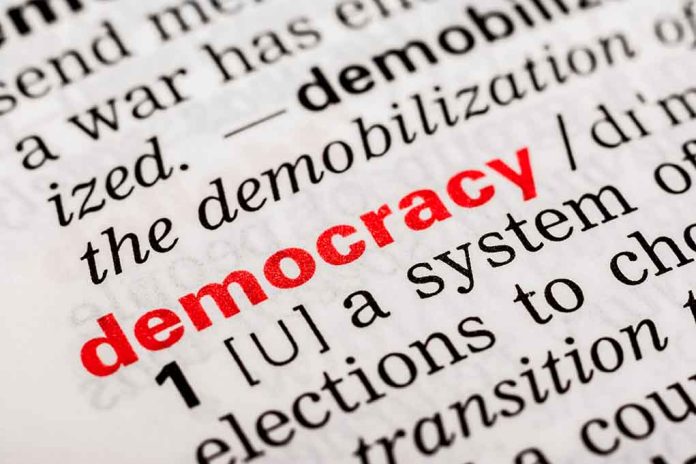 (UnitedVoice.com) – By definition, politics is the art of persuasion. It’s a craft few politicians truly master these days. Instead, most are on social media or friendly news networks appealing to the faithful. The result is sloppy communication and a partisan twist in an echo chamber incentivizing heated rhetoric.

On Sunday, December 19, moderate Democratic Sen. Joe Manchin (D-WV) finally followed through and killed President Joe Biden’s radical Build Back Better semi-Socialist proposal. It was a defining moment for the far Left. For six months, Manchin warned Democrats they were going too far for his liking. Despite his willingness to negotiate, he said it was no longer feasible, and he would vote “no” on Build Back Better. Immediately, the whines from the echo chamber started warning some Americans democracy was under threat because of Manchin, but is that true?

Is America’s Democracy Really Under Threat?

When things don’t go a Democrat’s way, or they feel threatened, they have a terrible habit. They love to exclaim there’s a threat to Democracy. They declared Trump was a threat to America for four years — that wasn’t true. After January 6, Democrats claimed the Capitol riot and the Republican response to it threatened America’s democracy — they didn’t. Now, they’re at it again, except this time it’s because of one of their own.

Following Manchin’s declaration on Sunday, the media and Democrats unsurprisingly downloaded on the Centrist West Virginia Democrat. Without him, they can do nothing in an evenly divided 50/50 Senate. On MSNBC, CNN, Twitter, and online news media, Liberals said Democracy was either hanging by a thread or severely threatened with extinction because of Manchin.

What Are Democrats Really Saying?

Let’s set the facts straight. Joe Manchin didn’t threaten America’s Democracy. If anything, he protected it. The Left says Manchin isn’t giving America what it wants. That’s not true. He’s not giving the Left what it wants. It’s hard to imagine 70+ million Trump voters crave this legislation or that the 60+ percent of independents who no longer approve of Biden do either.

West Virginians elected Manchin to represent them. Washington Democrats or voters in far-Left California didn’t. If voters in his state are telling him in large numbers they don’t want this atrocity of a bill, then Manchin can choose to listen to them or not. Ultimately, he’s responsible to West Virginia voters and them alone. That’s American democracy. He’s elected to Washington, DC, to represent their interests. Otherwise, we don’t need the states or elections.

Democrats are really saying their idea of expanded government and government-dependent programs incentivizing people to vote for them is at stake.

Let’s not confuse the facts with desire.