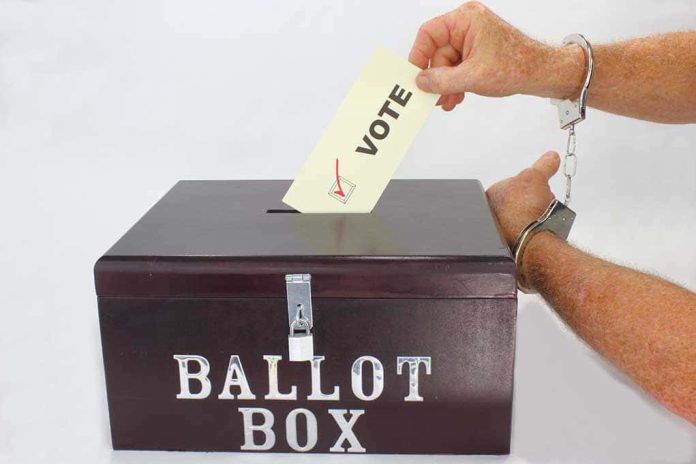 (UnitedVoice.com) – Democrats don’t seem to understand that stripping states of their Constitutional duties to conduct elections isn’t going to happen. They are attempting to steamroll their way to fulfilling a self-imposed August deadline to pass a voter reform law that will neutralize GOP election reforms in numerous states. However, they face significant obstacles as they try to re-ignite a federal hostile takeover of elections.

On Friday, August 6, Senate Democrats worked on finishing a tailored-down election reform proposal. Negotiators say they are close to reaching a deal on the measure, but we’ve heard that time and again. The new bill purportedly still tries to override state voting laws, albeit in a gentler and kinder fashion.

In recent weeks, Democrats set the stage to revitalize election reform. The move came as states began redrawing congressional maps as mandated by the US Constitution. Republicans picked up two additional US representatives in the 2020 election. They hold a decisive 61 to 37 advantage as they carve out districts that make the electoral map more favorable to the GOP for the next ten years, threatening the long-term power structure against the Democrats in Washington.

According to The Wall Street Journal, Democrats agreed on a narrow bill that focuses on voting procedures, significantly scaling back their attempts to federalize elections. Democratic leaders suggest there is agreement on several provisions on the scaled-back proposal from HR 1. Recommendations include imposing federal criminal penalties if someone interferes with counting ballots and certifying elections. However, that’s already against the law, and this is nothing more than a public relations gimmick.

In addition, the proposed legislation could also mandate a minimum of 15 days for early voting, automatically put people on the voter rolls when applying for or renewing driver licenses, and ban gerrymandering. Democrats also agreed to capitulate on voter ID requirements in hopes of swaying several GOP members to break ranks and support the bill.

Here’s the deal-breaker… requiring states to elicit permission from the federal government before changing voting laws. It doesn’t matter what Democrats put on the table. If this is in a final proposal, the necessary Republican votes to pass the bill won’t materialize.

Once again, Democrats are focusing on shoring up their party without addressing GOP concerns. Moderate Sen. Joe Manchin (D-WV) continues to suggest he will not vote for an election reform proposal without bipartisan support. While his words may be in the right place, it doesn’t matter. The legislation is dead without 10 Republicans willing to override a filibuster.

That means nothing is likely to change.

At this point, the attempt by Democrats to stop GOP-led states from enacting their newly passed election reform laws is window dressing. As far as the overwhelming majority of Republicans are concerned, the narrow proposal is a dead one. The Democrats know this isn’t going anywhere, but they need to whip up the donor base. If the Left doesn’t keep up appearances, few donors will give to the party, and Democrats need the money now more than ever if they hope to fight off the GOP onslaught a year from now.

In the end, Democratic hopes to pass election reform laws are a cynical attempt to raise money and motivate their base. It’s all they have left.