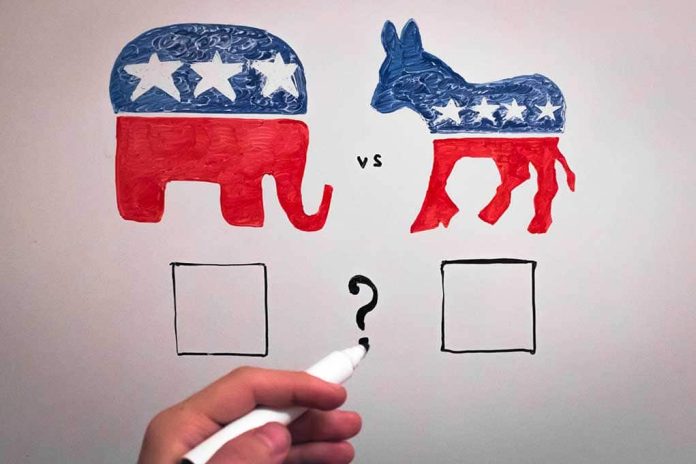 (UnitedVoice.com) – For the first time in decades, America may be undergoing a significant change in voting patterns. It comes as the country is growing more divided along party lines. Within the Democratic Party, there is a widening rift between Moderates and the far-Left to seize the upper hand. Complicating matters, former President Donald Trump made inroads with minority groups in 2020 that maintained the power of the Democratic Party. Across the country, there appears to be a shift occurring.

It shouldn’t be surprising. Under Trump’s leadership, the GOP increased the wages and living conditions for millions of Black and Hispanic families. In just the last year alone, Democrats pushed minority voters away and embraced big business. Vaccine mandates are forcing unvaccinated workers out of jobs, leaving them with no income or health insurance. How is that a good thing? The majority of these people Democrats are turning their backs on are suburban or urban Biden voters.

Will they turn to the GOP?

Across the country, Democrats destroyed public education, police departments, small businesses, employment, and communities with overhanded COVID mandates. Minority communities were impacted the most by the Left’s policies. Some may be asking themselves if Democrats are really watching out for their best interests?

We went from watching Biden and the Democrats ostensibly protecting America from COVID-19 to seeing Americans needing protection from them. They threaten jobs, livelihoods, health care, and basic needs. This Democratic-led government demonstrates it cares so much about people that it’s willing to hurt them to help them. Does that make any sense?

In cities across the country, Democratically elected officials are mandating businesses provide proof of vaccination before one can dine out, go to a ballgame, or generally participate in society. In New York City, estimates suggest upwards of 73% of Black residents between 18 to 44 years old refuse to vaccinate. Statewide, 53% of New York’s Black citizens aren’t vaccinated compared to 44% for whites. Who’s hurt the most by the informal vaccination mandates? How many jobs will be lost when Biden’s workforce vaccination mandate kicks in?

At the southern border, communities are under assault due to Biden’s reckless immigration policies. Trends suggest Hispanics are not the people who will give Democrats a permanent majority in Washington, DC. In 2020, former President Donald Trump picked up four points among Latino voters. In Texas, Trump won five counties where Latinos make up 80% of the population. He previously lost them in 2016. McAllen, Texas, a city that is 85% Hispanic, elected its first Republican Hispanic Mayor in June. Last month, California Gov. Gavin Newsom (D) lost 4% of the Hispanic vote in the recall election as compared to two years ago.

These are significant trends. But it’s not the worst of it.

Could Democrats Be in Trouble With Suburban Voters?

In 2020, suburban voters tilted strongly towards Joe Biden. Now, Democratic voters must live with a crisis of the president’s making. His vaccination mandates are crippling an already tight labor market and jeopardizing the livelihood and health of workers.

Corporations are announcing vaccination mandates. Combined, tens of thousands of jobs are at risk nationwide. United Airlines is preparing to fire nearly 600 unvaccinated employees. Other companies are sure to follow. Included among them is the federal government, which is America’s largest employer. Millions of government employees and contractors are at risk of losing their livelihoods.

What about hospitals? Across the country, health care workers once praised for sacrificing themselves on the front lines during the pandemic are being let go for refusing a vaccination. Not only does the bad policy hurt them, but it also hurts patients.

Many, if not most, of those hurt by Democratic policies, are their voters. Up until now, they were virtually unreachable to Republicans. Now, the GOP is an alternative. Will the party take advantage and attract the millions of once hard-core Democrats who the Left abandoned?

If minorities and suburban voters leave Democrats, who does that leave behind? A minority of woke white voters, upper-middle-class to affluent suburbanites unaffected by the Democrat’s destructive policies. There aren’t enough of them to build a political empire.

The opportunity is there, so long as Republicans don’t screw it up.