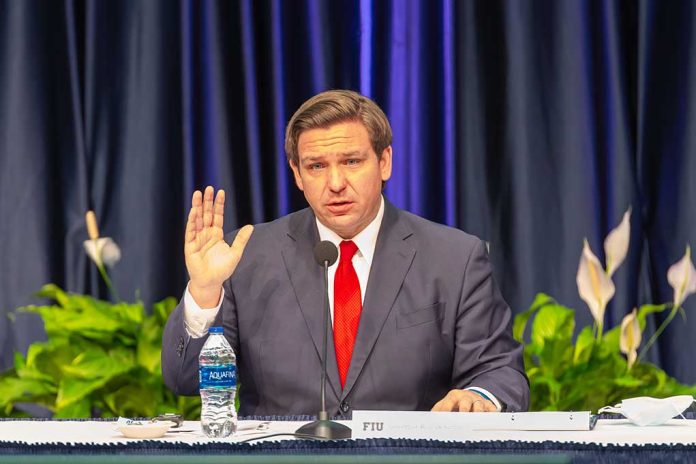 (UnitedVoice.com) – As Florida experiences a surge in the COVID-19 Delta variant, its governor may be showing how to fight back against big government, overreach, and far-left political fear-mongering. Republican Gov. Ron DeSantis is again taking incoming fire from those who prefer masks and browbeating over science and rational thinking.

On Tuesday, August 3, President Joe Biden took a swipe at DeSantis saying governors (like DeSantis) aren’t “willing to do the right thing to beat this pandemic.” He added that if governors aren’t going to help, they should “get out of the way.” That didn’t sit well with DeSantis, who fired back and said Florida would not capitulate to mask mandates, shut down, or destroy lives and livelihoods. DeSantis is showing America the difference between conservatism and liberalism, and how well he does could determine the nation’s fate.

Perhaps DeSantis’s most direct words to Biden were the most impactful as he called the president out on his hypocrisy. The governor said, “I don’t want to hear a blip about COVID” until the southern border is under control. Since March, stories continue to leak of the administration allowing illegal immigrants into the country who test positive for COVID. On July 30, whistleblowers at a migrant detention facility at Fort Bliss, Texas, blew the lid off the Biden administration’s cover-up over the virus running rampant among illegal citizens.

The governor made it clear to Biden that singling out Florida isn’t going to work. DeSantis pushed hard and added that Biden ran on defeating the virus. What’s he done? “He’s imported more virus from around the world by having a wide-open southern border.” DeSantis elaborated and said whatever variants are out there, they cross into America, and the president is “helping to facilitate it in our country.”

Clash of Conservatism vs. Liberalism

The root of the clash between DeSantis and his detractors is what’s driving the COVID debate. It’s not about the spread of the virus. If it were, the virus wouldn’t spread so wildly in Blue states that experienced mask mandates and extreme lockdowns. It would only increase in Red states with fewer restrictions.

While the virus proved it doesn’t see blue or red, Americans must ultimately decide between liberty or government control. Some like one, and some prefer the other. They can’t both exist at the same time.

Let’s break that down for a moment. Many hear the word liberty, and it conjures a particular image that’s rooted in a misunderstanding of the term. Let’s try to see past that for a moment. It’s not a concept commonly used in mainstream language any longer. It was replaced by “freedom.” They are not the same though there are links between the two.

In the early 1770s, and before, liberty wasn’t meant as a propagandist word to dispel the government. Quite to the contrary, the revolution was a fight to replace one form of government with another. Under King George III and the British parliament stripped the colonists of common rights such as property (including work and intellectual thought) through edict and law. British soldiers threatened citizens loyal to them, and the government turned citizens against one another for political gain. Prior to July 4, 1776, the colonists simply wanted to be treated equally and fairly with those on the mainland. If one takes the time to read each of the grievances outlined in the Declaration of Independence, this is well articulated.

The idea of liberty is to constrain government from exerting itself over the people and diminishing their natural rights as outlined in the Bill of Rights. The Constitution is a legal document that largely restricts the government, not empowers it. There are far many more amendments that tell the government what it can’t do than what it can do.

Instead of free markets, the federal government molds the economy through regulations, taxes, and Federal Reserve policies. Instead of educating children about history and civics, the government uses schools to indoctrinate Leftist ideologies such as Critical Race Theory over critical thinking skills. Politicians use masks, shutdowns, and government programs that lead to a lower quality of life and greater government dependency through multiple government programs to condition people to government power.

Even Biden acknowledged the new eviction moratorium issued on Tuesday isn’t legal but decided to test it anyway knowing it’s likely to get struck down by the Supreme Court. It’s another measure designed to pit one group against another.

The Left used the pandemic to leverage voters, lied, won an election, and is trying to transform America. Just consider the radical plans:

DeSantis is saying the power grab by the left is unacceptable in America’s Republican democracy. It runs athletically to the American experience, but how would one know that if there’s no one to stand up for it?

DeSantis said it eloquently on Wednesday. America can choose between living as a “free society, or we can have a biomedical security state. And I can tell you, Florida, we’re a free state.”

Let’s hope the people in Florida and across America are listening to the governor!