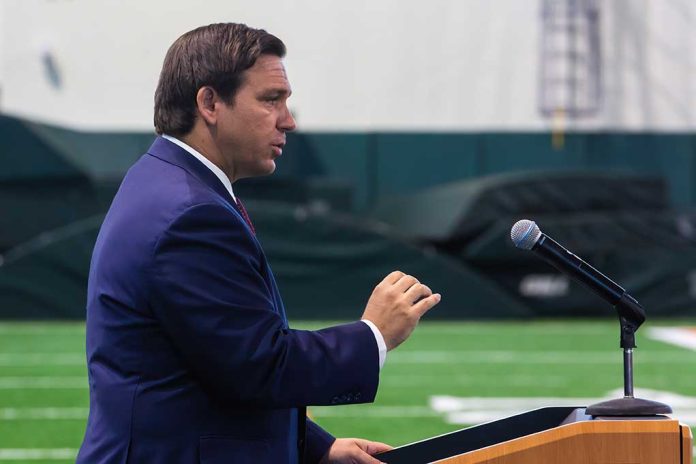 (UnitedVoice.com) – In 2021, illegal immigration exploded at the Southern Border. Sadly, to the dismay of millions of Americans stuck paying the bill for social services, education, healthcare, and even COVID-19, it appears the Biden administration not only doesn’t mind the situation, it actually empowered it.

To make matters worse, over the summer, Biden flew illegal immigrants across the United States to relieve the bottleneck in the system at the southern border. The administration may have made a public relations mistake when they secretly flew untold hundreds or thousands into Jacksonville, Florida, under the secrecy of night.

Florida Governor Ron DeSantis (R) went on a tear when he learned what the administration did in his state. Not long after the federal government chartered flights full of migrants into Jacksonville, at least one illegal immigrant murdered his sponsor. DeSantis swore tongue-in-cheek he would find the illegals, round them up, and bus them to Biden’s home state of Delaware. Now, he appears intent on following through, but is it Constitutional?

In a recent press conference, Gov. DeSantis said he earmarked $8 billion in the state budget to remove illegal immigrants from Florida. The popular governor stated his administration intends to send them to Washington, DC, Delaware, Martha’s Vineyard, or other beautiful Democratic areas. DeSantis added if he followed through, the president would secure the border the next day.

In addition to allocating financial resources to move the illegals out of state, DeSantis signed an executive order directing state law enforcement officials to collect data on illegal immigrants the Biden administration brought into the Sunshine State. DeSantis didn’t stop there. He proposed a legislative proposal to fine any company working with the federal government to bring illegal migrants into Florida and suspend them from doing business with the state.

If the Biden administration wants to keep the southern border wide open during the pandemic, or anytime really, and secretly fly illegal immigrants who are unvetted, unvaccinated, and perhaps include criminal gang members or human traffickers into states without informing them, then governors must move to protect their communities.

Illegal immigration has become a much more complex issue over the last 20 years. Since the inception of the US Constitution in 1787, the common legal understanding is the federal government and the federal government alone has the exclusive authority over both the substance and the procedure for admittance, exclusion, and removal of non-citizens — legal and illegal.

Currently, illegal immigration doesn’t just affect the federal government. It blows holes in state and local budgets. State Medicaid programs, the cost of education, welfare benefits, and even incarceration of those who commit serious crimes comes with a price to taxpayers in the billions of dollars nationwide. The Federation for American Immigration Reform (FAIR) says the cost to smaller states is so significant that governors and legislatures have no choice but to cut services to veterans, children, and disabled veterans.

DeSantis’ proposed action hasn’t faced a test in the courts, but it likely will when he goes through with the measure. Once in the country, can states kick someone out under the premise the federal government didn’t do its job to protect Americans from crime, gangs, or the pandemic?

It could be a tough road for the governor to win this issue, but it might open the door for states to demand restitution from the federal government. That’s problematic, too. So, what’s the answer?

There may not be one. As long as Democrats see a new voter base who could help them win elections, they will keep on allowing immigration under the guise of human dignity. Of course, it’s manipulation, but it works on too many voters.

For the moment, it’s intriguing to watch DeSantis upend and frustrate Liberals and Progressives as he sets himself up for re-election in 2022 and a potential run at the White House in 2024.