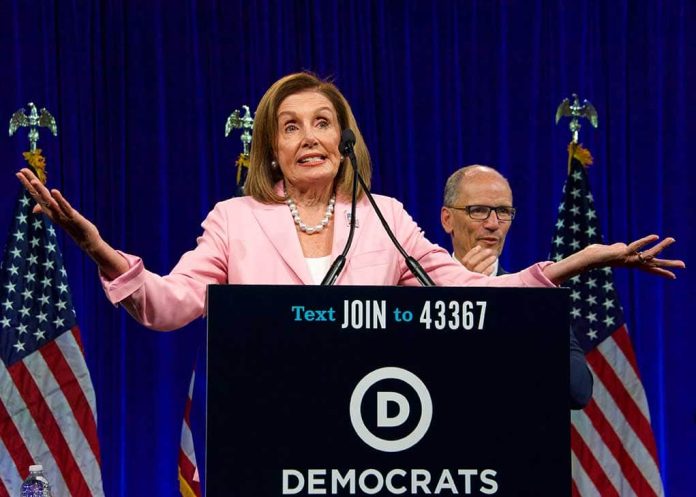 (UnitedVoice.com) – For nearly five months, Democrats continually got ahead of themselves. While they control both chambers of Congress and the White House, it’s becoming apparent they are boxed in by the constraints of their big tent. The party’s Left-wing is struggling to achieve its long-promised goals made to voters in 2020. Standing in their way are two Senate Moderates with the power to block any partisan legislation they don’t like.

That’s not stopping House Speaker Nancy Pelosi (D-CA) from potentially overpromising and underdelivering. In Glasgow, the Speaker is attending the UN COP26 climate conference. On Monday, November 9, Pelosi touted the Democrat’s partisan go-it-alone semi-Socialist reconciliation bill on the world stage. She made it appear as if the legislation is all but certain to become law when there isn’t anything inevitable about it. Is she once again overplaying her hand?

Pelosi Acts Like the “Human” Infrastructure Proposal Is a Done Deal

Speaking before an audience clamoring for global climate change initiatives, Pelosi tried to do all she could not to disappoint the global climate audience. She called the Democrats’ reconciliation legislation ambitious, consequential, and the cleanest energy legislation ever proposed.

Pelosi added the bill would provide:

What does all of that mean? Who knows because neither Pelosi nor anyone else defines it. Perhaps most importantly, Pelosi said the House would vote on the legislation around November 15 when they hope the Congressional Budget Office (CBO) provides a score. Congress’s budget arm says it will need to piecemeal the legislation together to approximate the bill’s cost, and it could take more time than Democrats realize.

Even if the House passes the reconciliation bill, and there’s no guarantee that will happen, the Senate is likely to make the legislation unrecognizable to House Democrats. Moderate Sens. Joe Manchin (D-WV) and Kyrsten Sinema (D-AZ) already stripped out tax, social, and climate change provisions once and Democrats shoved them back into the bill. On at least one occasion, Manchin said he could vote to upend the entire bill, and he would be okay with it.

Pelosi Set Up America for Failure

In October, Manchin and Sinema worked with President Joe Biden in good faith to arrive at a framework. Democrats are blowing up that agreement and ignoring Manchin and Sinema at their own peril. In particular, Manchin has clearly stated what he will and won’t accept. On Thursday, November 4, the West Virginia Senator said he wouldn’t be working off the legislation the House intends to pass. Translation: The tax, social, and climate change legislation is dead on arrival.

So, is Pelosi setting America up for failure on the world stage? It sure looks like it. Whether or not there are problems with legislative issues at home, America’s leaders should be trustworthy on the global stage when they speak overseas. When legislators take our domestic politics to the world stage and fail, the failure erodes allies’ trust and provides America’s enemies a reason to believe we are weak.

Once again, it seems Pelosi is overplaying her hand, except this time it’s on the world stage. When will Democrats learn not to count their chickens before they’re hatched? It’s no laughing matter when America ends up with egg on its face — again.