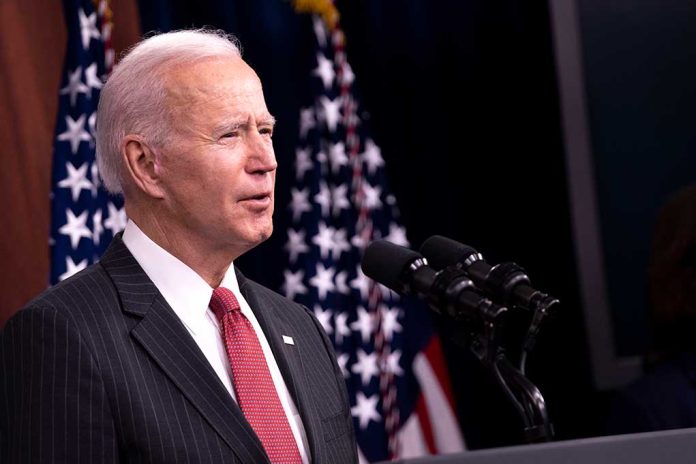 (UnitedVoice.com) – President Joe Biden has never been popular on the far-left. Rep. Alexandria Ocasio-Cortez (D-NY) and other Progressives have famously shown a lackluster amount of support for him. Though he won the 2020 election with more votes than any other candidate in the country’s history, many don’t want him to run for office again. One Democratic group is making it clear in a very public way.

RootsAction Co-founder Jeff Cohen spoke to Fox News Digital about its campaign geared towards keeping Biden from running in 2024. The far-left liberal explained that the group doesn’t think the president is the “strongest candidate” to defeat Republicans in 2024. He went on to say the organization was running columns, television ads, creating petitions, and now has a mobile billboard making its way through DC streets.

A truck with a large sign reads, “Most Democrats Say Don’t Run Joe.” The group parks it in front of attractions in DC like the Lincoln Memorial, the Washington Monument, and even the White House.

A large billboard urging President Biden not to run for re-election has begun appearing in front of the White House and the Capitol this week, as the Don’t Run Joe campaign boosts its presence in the nation’s capital. #DontRunJoe pic.twitter.com/DQJnWhZMMF

The group announced the campaign last year to keep Biden off the ballot. The group tweeted that it would be a “tragic mistake” to renominate the 46th president.

It’s clear that Joe Biden should not be the party’s presidential nominee in 2024. With so much at stake, renominating Biden would be a tragic mistake.

Join us in our fight for a better future: https://t.co/4dE1rZ4QgI pic.twitter.com/VVXO8Jdg6i

In December, Newsweek reported the president was facing a large number of people who don’t want him to run for reelection. Redfield & Wilton Strategies conducted a poll for the publication and found 58% of eligible voters don’t believe the current president should run again. More than 40% of them cited his age as one reason he should leave office. Biden will be 81 when the next election rolls around, and he’s already the oldest POTUS ever to serve. Other issues include the current economy, midterm results, and preference for other candidates.

Biden has said that he intends to run for reelection but hasn’t made a formal announcement yet.