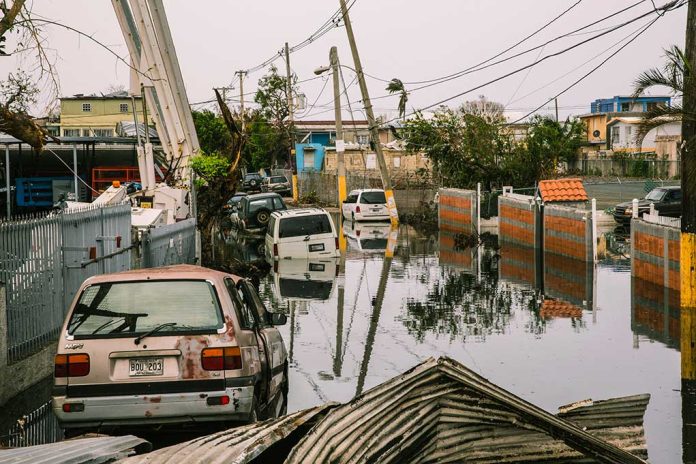 Drug Cartel Steps up To Help the Poor After Hurricane

(UnitedVoice.com) – The Sinaloa Cartel is one of the most brutal criminal organizations in Mexico, responsible for thousands of deaths in the bloody Mexican cartel wars. Its previous leader, Joaquín “El Chapo” Guzmán, is currently serving a life sentence in the United States.

While the Sinaloa Cartel is widely known for its brutality, its members recently stepped up to help the country recover after a hurricane ripped through. It wasn’t the first time drug smuggling killers have provided aid.

From Gangsters to Humanitarians

On October 3, Hurricane Orlene slammed into Mexico’s Pacific coast. The storm didn’t do much damage, certainly not like Hurricane Ian. Yet, there were still families negatively impacted by the weather. The Sinaloa Cartel learned of the people struggling in its communities and stepped up to help.

According to reports, the cartel delivered hundreds of food baskets with its name and logo on the packages. Breitbart reported that a cartel leader known as “El Changuito Antrax” sent messages through social media platforms to let residents know they would deliver food. In September, he also sent out care packages after an earthquake.

The recent food drive isn’t the first time cartels have reached out to help residents. In 2020, the Sinaloa Cartel handed out packages that included face masks with El Chapo’s image and Osama Bin Laden on them.

Drug cartels in latin America, are playing their role in curbing the spread of Covid-19 by punishing those who break curfew rules.
The Sinaloa cartel and the daughter of imprisoned drug lord El chapo, distributed Food packages bearing images of her father and Osama Bin laden. pic.twitter.com/TzadJdIoaT

Other Mexican cartels also handed out supplies and assistance during the pandemic. But experts say it isn’t surprising.

Cartels need new members to survive, just like any criminal organization. Helping the community is one way to recruit people to join the gang. In 2020, when the cartels were providing COVID-19 aid to communities, President Andrés Manuel López Obrador floated the possibility of offering amnesty to some gang members.

Vanda Felbab-Brown, with The Brookings Institution, wrote an article about the humanitarian projects the cartels were undertaking. She said it wasn’t shocking in 2020 when the gangs were handing out food packages and other things because they were trying to “build up political capital by distributing the handouts.” It’s unclear how much capital they amassed during that time.

Felbab-Brown pointed out that criminal organizations worldwide engage in this kind of behavior to help them stay in power. Often, these gangs will target communities where there is food insecurity, even in the US, and entice people to join them with promises of meals.

Do you think that’s what the Sinaloa Cartel is doing in the wake of the hurricane?