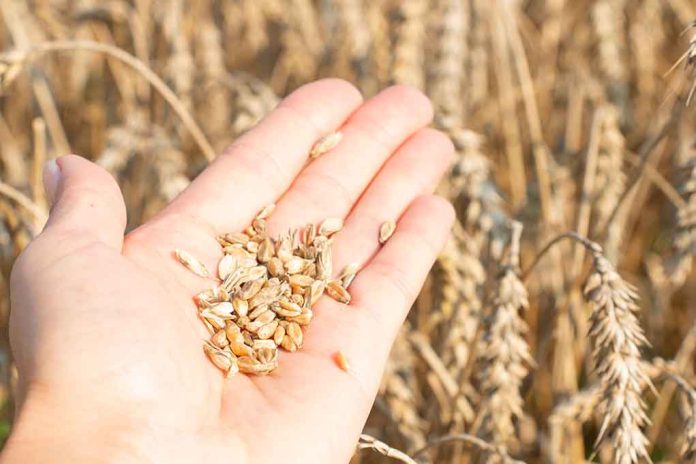 Farmers Are Preparing For Hell On Earth – This IS NOT Good!

(UnitedVoice.com) – Ukraine is known as the “Breadbasket of Europe” because of its abundance of grain farms. The Russian war on the country has put a significant strain on farmers and the country’s ability to export. As harvesting season approaches, farmers are preparing for a hellish season.

According to a report by Euronews, Ukrainian farmers are preparing to survive the harvesting season while the Russian military fires upon them. A farmer named Volodymyr Onyschuk told the website that agriculture is still up and running, but the invading army now wants to destroy it. He spoke about the problem while standing next to a pile of Russian shell casings on his wheat and sunflower farm. Onyschuk went on to say the fire from the weapons threatens crops, and it could be “hell” when harvesting begins in a few weeks.

🇺🇦 Shelling is feeding fear across a sector already hamstrung by Russia's blockade of the Black Sea, the primary route for Ukraine's vast agricultural exports. #UkraineRussiahttps://t.co/WEngqucpxq

The Ukrainian government has accused Russia of intentionally attacking agriculture and infrastructure to cause a global food crisis. Theoretically, the crisis would pressure Ukraine’s Western allies to stop helping the nation resist the Russian invasion. If they ceased aid, Russian President Vladimir Putin could seize whatever he wanted, and the war would end.

The United States and Europe have shown no intention of abandoning Ukraine.