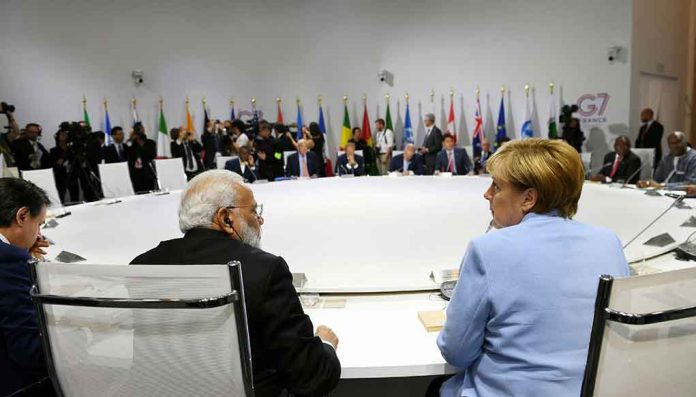 (UnitedVoice.com) – US military officials believe there is a high likelihood that Russia might invade Ukraine — again. President Vladimir Putin has sent tens of thousands of troops and heavy machinery to the border region with the neighboring country. The G7 (which stands for Group of Seven) G7 leaders have issued a warning to Russia in response to the ordeal.

On Sunday, December 12, the world leaders released their statement. The US, UK, France, Germany, Italy, Japan, Canada and the high representative of the EU said they’re united in condemnation of Putin’s “aggressive rhetoric” and “military build-up” towards Ukraine. The statement warned there would be “massive consequences and severe cost in response” if Russia broke international law again and annexed any more territory from Ukraine.

The G7 FMs call on Russia to de-escalate, pursue diplomatic channels, and abide by its international commitments on transparency of military activities. Further military aggression against Ukraine would have massive consequences and severe cost in response.https://t.co/hKGMrDZcsV

The nations also called on Russia to de-escalate and figure out a solution to its problems with its neighbor through diplomacy, not war.

Thus far, Putin hasn’t shown he has any desire to de-escalate. In fact, he’s been pretty defiant. His team has said it has no plans to invade while also claiming threats of economic sanctions against them are meaningless. It seems as though there’s no way to stop the adversarial nation if it chooses to invade.

What do you think the G7 could do to stop Russia?