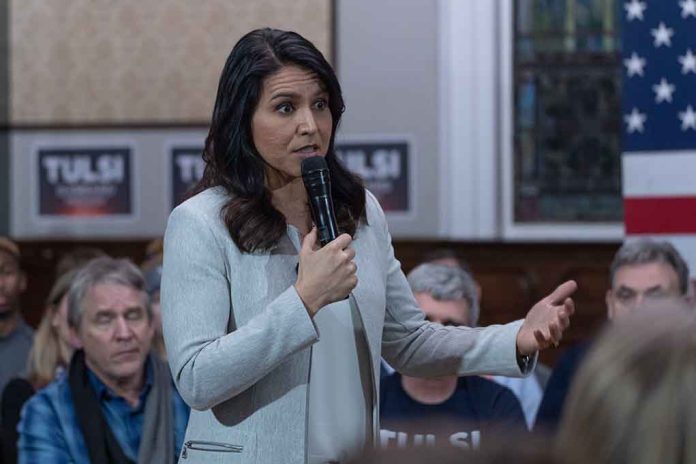 (UnitedVoice.com) – Former Democratic presidential candidate Tulsi Gabbard has resigned from the party and given a shattering statement that explains her reasons. The Iraq veteran and ex-congresswoman told Fox News’s Tucker Carlson that she left the Democrats because they undermine freedom.

On October 11, Gabbard, a moderate Democrat who represented Hawaii’s 2nd Congressional District from 2013 to 2021, released a half-hour YouTube video explaining that she’d left the Democratic Party because it’s now dominated by “an elitist cabal of warmongers.” Later the same day, she spoke to Carlson to expand on her reasons.

Former Hawaii Rep. ⁦@TulsiGabbard⁩ speaks out after leaving 'woke' Democratic Party: My 'loyalty' is to the country, not the caucus https://t.co/fZosBTOvca

According to Gabbard, the party is now controlled by “fanatical ideologues who hate freedom.” She said the Democrats reject the Constitution and the rights it protects. She noted that as a soldier — she was a Lieutenant Colonel in the Hawaii Army National Guard and is now an Army Reserve officer — her oath to protect the Constitution is something she takes seriously.

Gabbard has always been a Moderate, and she told Carlson she’s an independent-minded Democrat, but since her unsuccessful 2020 presidential campaign, the party’s race to the left has left her far behind. Hillary Clinton has accused her of being a “Russian asset,” and Gabbard voted against several of the Biden administration’s more left-wing ideas.

Now, she says, she’s had enough of unpatriotic wokeness — and as many Republicans pointed out, she’s not the only one.