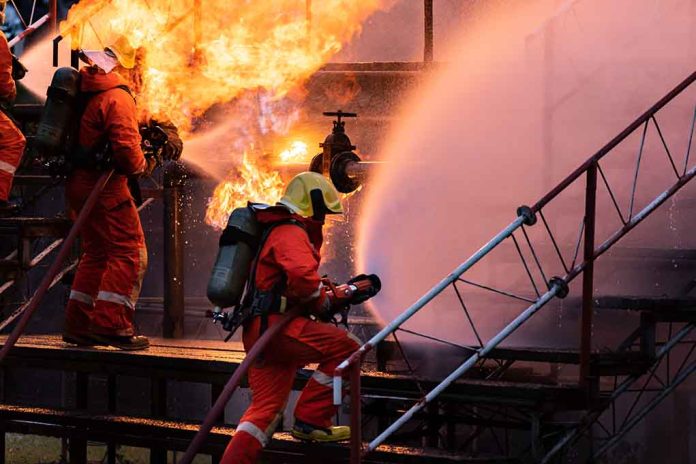 (UnitedVoice.com) – For more than a month, Ukraine has been gaining ground in the war. The invaded country has managed to recapture some of its lands, drive out the enemy in places, and even struck one of Russia’s main supply arteries. Now, President Vladimir Putin’s military is fighting back, and the campaign caught a German consulate in the line of fire.

On Monday, October 10, Russian airstrikes hit Germany’s embassy in Kyiv. The consulate maintained offices in a high-rise building downtown. However, when the war broke out in February, the European country evacuated its employees from the area, leaving the offices empty.

A building in #Kyiv, which also houses the German visa office, was damaged by rocket fire this morning. Since the beginning of Russia’s war of aggression, these offices have not been used by our embassy. Our colleagues at the Embassy in Kyiv are well. (2/2)

Journalist Dan Peleschuk reported the missile strikes also hit a park, university, national opera, hotels, and a church. The Ukrainian government has not confirmed strikes in all those locations.

A more complete inventory of objects in the immediate vicinity of one of today’s strikes in central Kyiv:

The attacks come days after the Ukrainian military bombed the Kerch bridge, causing a partial collapse. The structure was the only roadway connecting Russia to Crimea, the territory it took from Ukraine in 2014.

According to The Guardian, President Joe Biden issued a statement condemning the recent Russian bombings. The POTUS said, “They once again demonstrate the utter brutality of Mr. Putin’s illegal war on the Ukrainian people.”

The bombings have killed at least 14 people and injured nearly 100.