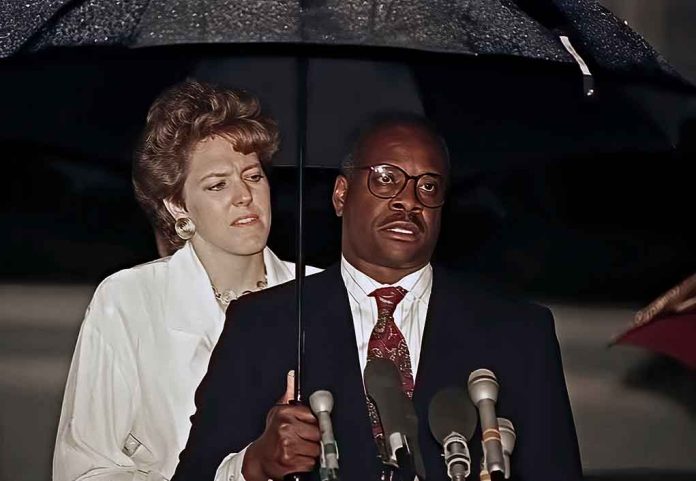 (UnitedVoice.com) – Ginni Thomas isn’t a regular conservative activist. She’s the wife of a Supreme Court Justice. For decades, that fact led Democrats to assert that Justice Clarence Thomas had a conflict of interest. Yet, nothing in law or ethics suggests that’s true. Nonetheless, Ginni Thomas was a staunch supporter of former President Donald Trump. In the final days of his presidency, she advocated for keeping him in office ahead of Congress’s certification of the Electoral College.

On Friday, May 20, The Washington Post brought new revelations about Mrs. Thomas’ activities in the days leading up to the Electoral College vote. Previously, the media revealed that Thomas texted former White House Chief of Staff Mark Meadows to ask him to do all he could to ensure that Trump remained in the White House. Now, The Washington Post says she also took her conservative activism to statehouses.

After the media declared then-Democratic presidential nominee Joe Biden the winner of the 2020 presidential election, Thomas emailed Arizona lawmakers to push them to select a clean slate of Electoral College electors who would be more friendly to President Trump.

Despite presidential elections every four years, voters don’t have a direct say in electing the president. Article II of the US Constitution spells out that state legislatures appoint electors to choose a president in the Electoral College. The public vote is merely symbolic, yet most electors respect the people’s wishes, though they aren’t obligated to do so.

According to The Washington Post, on November 9, 2020, Thomas emailed Arizona lawmakers to ask them to intercede in the Electoral College. She didn’t mention either Biden or Trump by name, but she didn’t need to, in context. The conservative activist asked the Arizona Speaker of the House Russell “Rusty” Bowers (R) and state Rep. Shawnna Bolick (R) to stand firm and reminded them it was their Constitutional duty, and theirs alone, to fight back against voter fraud and appoint Electoral College electors who would do the right thing.

Thomas Keeps Her Political Activities Separate From Her Husband’s Work

While Democrats and the media try to make hay out of the revelations, Ginni Thomas sought to dispel any myths in a recent interview with The Washington Free Beacon. In March, she told the paper that she and her husband share many ideals, principles, and aspirations for America. Still, Ginni said the couple has different careers, ideas, and opinions. The conservative attorney said the two don’t discuss their work. Additionally, Thomas insisted she must be true to herself and her calling, saying one could never be intimidated, chilled, or censored.

Ginni Thomas has confirmed her attendance at the January 6 Stop the Steal rally but said she was only there a short time before leaving. The GOP activist said the violence following the peaceful protest disappointed her. She fears America is losing the ability to raise important and legitimate questions about issues such as racial equality, electoral integrity, and political accountability.