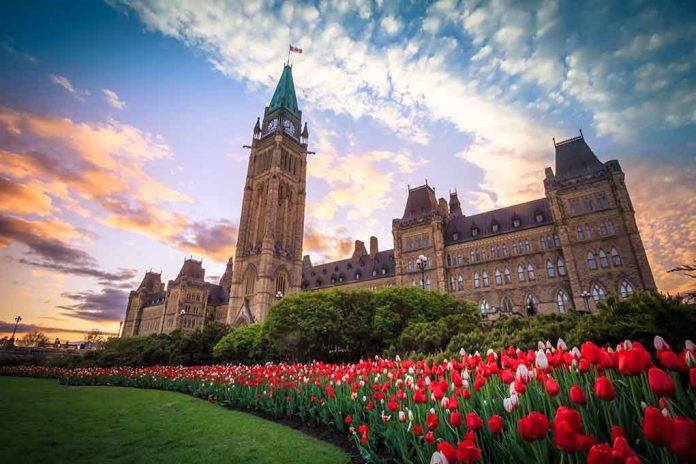 (UnitedVoice.com) – Canadian truckers, known as the “Freedom Convoy,” have been protesting COVID-19 mandates in the country for nearly a month. Prime Minister Justin Trudeau’s government launched an all-out assault on the protesters in an attempt to silence them. Now, the Parliament has agreed to back his attack.

On Monday, February 21, lawmakers voted 185-151 to support the government’s decision to impose the Emergencies Act. The measure allows the Canadian government to treat the protesters like terrorists. They can also seize trucks, cancel insurance policies, and arrest those involved. The country also froze hundreds of financial accounts tied to the protests, something the government has now ended.

Before the vote, Trudeau defended the use of the Emergencies Act, something that hasn’t been invoked since it passed in 1988. He claimed it needed to stay in place because the situation was fragile, but promised it wouldn’t be in place for “a single day longer than necessary.” Of course, Canadians are incredibly worried that’s a lie.

While the government was making a decision about the prime minister’s emergency powers, Ottawa police cleared out the rest of the Freedom Convoy members from Parliament Hill. Over 3 days they towed more than 70 vehicles, arrested 191 people and charged 103 of them with a total of 389 crimes.

Do you think the concerns of tyranny are valid?