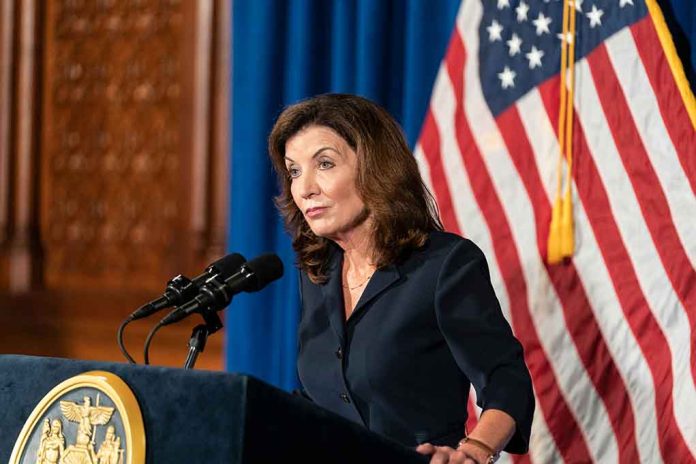 (UnitedVoice.com) – For decades, Democrats have regularly used mass gun shootings to justify their desire to minimize Second Amendment rights. The efforts are so pervasive that Conservatives have come to expect Democrats to try and overreach. On Saturday, May 14, a mentally ill young man entered a grocery store in Buffalo, New York, killed 10 people and injured 3 others. Prosecutors charged Payton Gendron, 18, with first-degree murder.

Gendron reportedly left behind a disturbing 180-page manifesto alleging the government was bringing in non-white people to replace white voters as part of a political agenda. On Wednesday, May 18, New York Gov. Kathy Hochul (D) announced the signing of two executive orders. One created a domestic terror unit, and the other allowed law enforcement to seize firearms for a potential threat that hasn’t happened yet. The question is, is the governor’s action Constitutional?

Gov. Hochul said the state needed the comprehensive measure to combat domestic terrorism and violent extremism in New York. She referred to mass shootings as an act of white supremacy and said her executive orders would strengthen and close loopholes in gun laws. Hochul ordered state law enforcement to identify people who were radicalized into white supremacy and track their threats on social media.

Executive Order 19 required state police to file Extreme Risk Protection Orders (ERPO) under New York’s Red Flag Law when law enforcement thinks it has probable cause to believe someone is a threat to others or themselves.

The question is, what do these orders really do?

On Friday, the New York Post said Hochul’s two executive orders don’t directly impact stopping people intent on committing a mass shooting event. Yet, they do increase the power of the police surveillance state on citizens who haven’t committed a crime under the guise of stopping race-driven domestic terrorism, but is that what’s really going on?

While authorities believe Gendron was racially motivated, the Post said that isn’t the norm for mass shooting incidents or shootings in general. The paper characterized gun crime as largely a single race issue, based on 2018 FBI statistics. It noted that white people generally shoot white people, and black primarily killed other black people. It said that in 2018, 88.6% of black murder victims fell at the trigger of a black offender.

So, does that justify using white supremism as the root cause of most murders, and does it justify expanding the police surveillance state?

A separate New York Post article noted that Hochul’s executive order to stop the shooting by preemptively seizing Gendron’s firearms would not have worked. It stressed that Hochul’s order was largely symbolic as the Empire State already had 300 red flag laws on the books. The problem is Gendron passed his mental fitness exam to own a gun and was legally permitted to obtain the rifle used in the mass shooting.

In December 2020, the US Supreme Court ruled the Second Amendment protects an individual’s right to possess and carry a weapon in New York State Rifle & Pistol Association Inc. v. Corlett. It said a New York municipality could not preemptively forbid gun ownership based solely on the need to protect oneself from a known direct threat.

So, the question is, did Hochul go too far in ordering state police to confiscate weapons if it believed there might be a reason without support? It won’t be the first or last time a Democrat tries to infringe on Constitutional liberties around the Second Amendment.