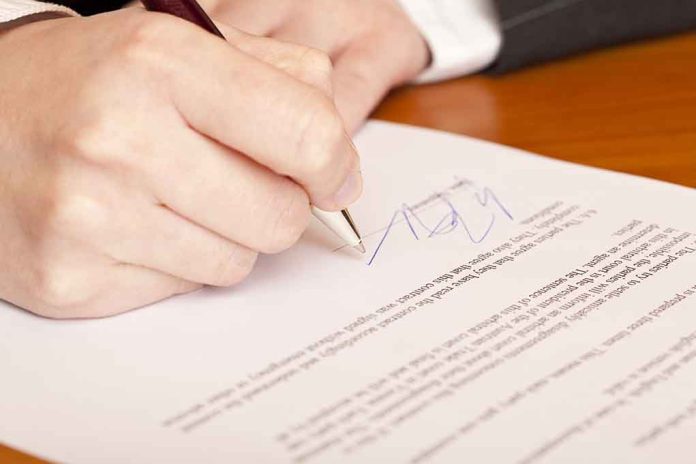 (UnitedVoice.com) – As America braces for the prospect that Roe v. Wade could be overturned by the US Supreme Court anytime over the next four to five weeks, some pro-life states are already taking matters into their own hands. In Oklahoma, Governor Kevin Stitt (R) has signed two pieces of legislation into law banning abortions. In April, Oklahoma made it a felony to perform an abortion with up to 10 years in prison.

On Wednesday, May 25, Gov. Stitt signed a second abortion bill into law. It builds on the first to ensure that Oklahoma is a pure pro-life state. The Sooner State moved to pass anti-abortion laws soon after the Supreme Court refused to overturn a Texas abortion law, all but making it impossible to receive the procedure in the Lone Star State. Women flooded to Oklahoma to get an abortion. The conservative state legislature put in stricter standards than Texas to prevent women from crossing state lines for the procedure.

Oklahoma Has the Most Stringent Abortion Laws in the Country

Oklahoma now has the distinction of having the strictest abortion laws in America. The state effectively bans the procedure between the two laws except in rare cases. In April, Stitt declared that lawmakers wanted to outlaw abortion in Oklahoma and promised voters he would sign every piece of pro-life legislation that came across his desk. Under the first bill, SB612, if anyone provides an abortion service, they face up to 10 years in jail and up to a $100,000 fine. The bill only addressed abortion providers and not women seeking an abortion. The law takes effect after Labor Day.

On Wednesday, Stitt signed a bill into law similar to Texas’ anti-abortion law. HB4327 reinforces the April legislation by allowing citizens to sue those who aid a woman in obtaining an abortion. The legislation would prohibit any abortion with only a few exceptions, including saving a pregnant mother’s life or if the pregnancy resulted from rape or incest specifically reported to law enforcement. The law went into effect immediately after the governor signed it.

Still, some say the legislation is too vague on exceptions and might prevent doctors from performing the procedure unless absolutely medically necessary. Additionally, the law doesn’t apply to morning-after pills or any type of contraception.

Guttmacher Institute policy analyst Elizabeth Nash told NPR the law is disastrous for Oklahoma. She said it would cause significant issues, especially for women who traveled from Texas to receive an abortion.

After Gov. Stitt signed the legislation on Wednesday, The Center for Reproductive Rights and Planned Parenthood said it would sue Oklahoma over the new law. In a statement on Twitter, the two groups said the law was cruel and said Oklahoma should restore abortion rights.

#BREAKING: Oklahoma just became the only state in the U.S. to totally ban abortion while #RoevWade still stands. The Center & @PPFA are suing the state of Oklahoma on behalf of abortion providers and advocates to stop this cruel ban and restore abortion access in the state. pic.twitter.com/IOxefOqmfV

Center for Reproductive Rights CEO Nancy Northup told CNBC that banning abortion after six weeks was bad enough, but Oklahoma’s new law injects fear and chaos into the state and others as the domino effect falls.