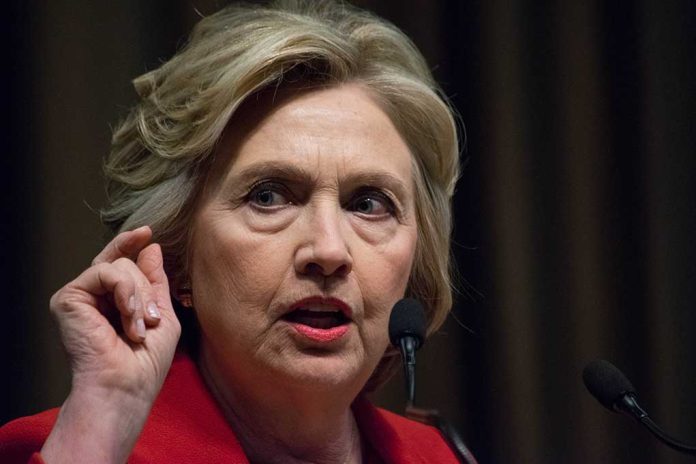 (UnitedVoice.com) – Throughout her political career from Little Rock to Washington, DC, many political analysts have considered Hillary Clinton a mainstream liberal Democrat — certainly not on the fringes of the Democratic left-wing controlled by socialists like Sen. Bernie Sanders (I-VT) and Rep. Alexandria Ocasio-Cortez (D-NY), especially when it comes to practical issues that defeat Democrats at the ballot box. In just a short time since Clinton lost to former President Donald Trump in 2016, racial and social justice issues have taken center stage, including defunding the police, Critical Race Theory, and even transgender issues. Now, Hillary Clinton is again warning Democrats to refocus on issues that win elections.

In December 2021, Clinton warned that if Democrats weren’t careful, they could hand over Congress to Republicans in the 2022 midterm elections. She cautioned her party to stop thinking about issues important to the far-left and start thinking about issues that win elections beyond deep blue districts because there aren’t enough of them to maintain their majorities. The former first lady, senator, and secretary of state insinuated that if the radical left were in control of the party, Democrats would face a resounding defeat.

On Friday, June 17, Hillary Clinton again issued a stark warning to Democrats. In an exclusive sit-down interview with the Financial Times, the twice-failed presidential candidate didn’t mince words. She said if Democrats make transgenderism a cornerstone issue in November instead of focusing on winning elections, they’ll make the GOP the majority in Congress.

She noted Democrats appear to be trying to lose elections by focusing on activist themes like transgender issues. She said that, in reality, it impacts a small minority of voters. Clinton insinuated that if her party focuses on minority issues, they’ll communicate they don’t care about the issues important to most voters.

Clinton added that winning in November is a bigger priority than focusing on “pet issues” that aren’t critical to most voters.

While Clinton may be a pragmatist, she’s also a liberal who believes that Conservatives and the GOP will ruin America’s democracy. Conservatives might see her view as misguided and lacking in understanding of what Conservatism is and does, but many elected Democrats across the political spectrum largely subscribe to Clinton’s view. The former politician added that if the GOP wins, it would be frightening for America. So, whatever the issues are for voters, she believes those should be the priority for Democrats — not the other way around.

She isn’t alone in her thinking. Last November, former Clinton political strategist James Carville blasted Democrats over their woke policies that led to defeats down-ballot in Virginia and nearly cost them the governor’s seat in deep-blue New Jersey. Carville said that far-left Democrats needed to go to a “woke detox center” and stated that too many in the party were using words and ideas that everyday people can’t relate to in their lives. He suggested a backlash could come as a result.