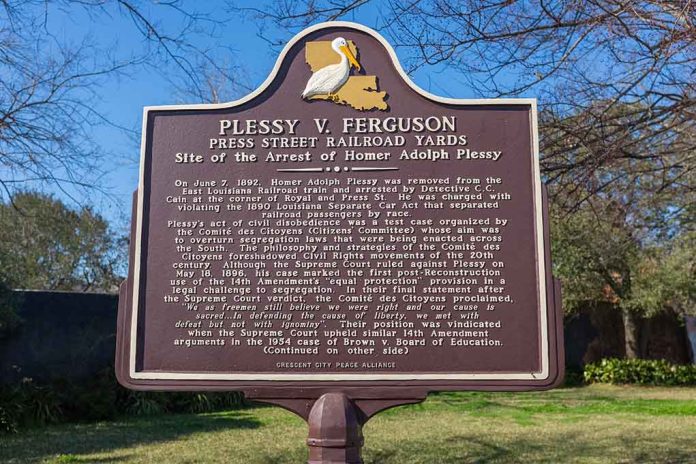 (UnitedVoice.com) – In the years following the end of the Civil War in 1865, three Constitutional amendments were passed (the 13th, 14th, and 15th) abolishing slavery and providing Black people with equal protection under the law. At the time, “separate but equal” was the law of the land in many places. It took brave men to fight these injustices. Now one of them, Homer Plessy, is getting his justice.

Some of the early attempts at “equality” were state laws requiring railroad companies to provide separate cars — or partitions within cars — to keep White people separated from those of other races with “equal” accommodations. A group of young Black men in New Orleans came together to challenge those laws in 1891. Homer Plessy was one of them.

Mr. Plessy was considered a “mulatto,” meaning his ancestry was 7/8 White; one of his great grandparents was Black. The group chose Plessy to board a train and take a seat in the compartment designated for White passengers. When ordered to leave the car, he refused and was forcibly ejected and arrested. In 1892, he was convicted of violating the law.

A lawyer named Albion W. Tourgée, along with a group of politicians and other prominent figures who fought for the emancipation of the slaves and the equal treatment of them, afterward known as the Radical Republicans, took on Plessy’s case. They argued it all the way to the Supreme Court (SCOTUS), resulting in the landmark ruling in Plessy v. Ferguson in 1896.

While the justices ruled against him, it did set the groundwork for the subsequent decision in Brown v. Board of Education of Topeka (Kansas), which did away with the “separate but equal” doctrine.

Mr. Homer Plessy is officially pardoned by the State of Louisiana. There is no expiration date on justice. #lagov pic.twitter.com/U7Xf4tP169